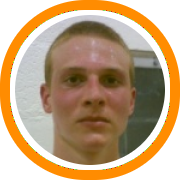 Three local prospects stood head and shoulders above the rest as Mike Marra, Kyle Casey, and Tucker Halpern were clearly the stars of this field.  Marra is coming off of a tremendous performance earlier in the week when he scored 40 points for his Rhode Island Hawks team as they took on the New York Panthers.  Casey and Halpern also had excellent starts to the summer live period although both are battling injuries at the moment.

On the first night of camp all three players shined.  Marra was good for his typical barrage of three-pointers and occasional highlight dunk while Casey and Halpern paired together to lead their team to a victory over a group of Phillips Exeter players.  Halpern showed little effects of the thumb injury he sustained earlier in the week as he too was stroking his shot from deep.  Casey on the other hand appeared to be moving a little gingerly as he tried to get around on a sprained ankle.  Nevertheless, he was still able to come up with some crucial buckets and blocked shots down the stretch to lead his team to the victory.

Not only were Casey and Hapern paired together on a team but they were also complimented by a terrific supporting cast including the likes of Sam Martin, Derek Retos, and Derick Beresford.  In the game against Exeter, all three played important roles.  Martin was most impressive in the first half when he made two separate drives to the rim using an explosive killer crossover move while also showing the range on his jumper.  Conversely, Retos was at his best in the second half.  After going through a shooting slump in the first the long distance marksmen came back in the second with three long range bombs.  Beresford, who will be joining Halpern at Nobles next season, was very impressive as he was able to penetrate and pitch to create shots for all of the shooters on his team as well as create his own shot with some impressive ball-handling and quickness.

Raoul Edou-Oloa stood out for the future Exeter team.  The Portsmouth Abbey graduate is definitely more skilled than advertised and is also a mismatch problem as he demonstrated an ability to score both inside and out.

In other action a series of point guards were able to stand out.  IMG product and Connecticut native Brett Tessler was not only extremely effective but very entertaining with his fast paced style.  In fact with his constant pushing of the ball along with his long air and small stature he was quickly nicknamed “Nash” by many of the coaches looking on.

Greg Newton is another point guard who was extremely impressive in the open floor.  The Rhode Island native made a series of attacking dribble moves and showed some deceptive explosion in his leaping ability as he finished around the rim.  Not to mention the fact that he is also a fantastic three-point shooter.

While there were a series of other scholarship candidates on hand including the likes of David Rufful, Andrew Yanulis, Cory Stockmal, Kyle Stockmal, Greg Jacques, and Tim McKinney, this camp was particularly strong in terms of the depth of talent as the vast majority of the 180 players attending were capable of playing college basketball at some level.

To quote one on-looking division III college coach, “This is a recruiting paradise for me”.

Two players who were able to build a bit of a name for themselves tonight were Peter White and James Long.  White may also have a chance to play himself onto the scholarship level because of the athleticism that accompanies his skill level.  He was at his best tonight when showing off his mid-range game or when running the floor and finishing above the rim.  Long on the other hand may not be able to match the physical size or athleticism of some other post players, but tonight he found ways to work around that as he showed some excellent footwork along with a wide variety of low post moves to establish himself on the block.

Overall it was a night of well played basketball as each team competed strongly and showed the type of high basketball I.Q.’s that you would expect to find at the Academic All-American camp.