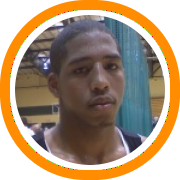 Naofall Folahan – His week started and ended on high notes after being the first big man taken in Sunday’s draft and then being selected for Wednesday’s all-star game.  He was equally impressive at all stops in between as he was one of the top players in the field on talent alone.  His potential seems limitless with so much size and athleticism, not to mention some deceiving skills.

Corey Wright Jr. – He thrived at this camp a year ago and had similar success this year.  In a camp style atmosphere he’s very effective as his handle and passing give him the best weapons you can possibly have in this type of up and down game.

Melsahn Basabe – He was the talk of camp practically all week long as he was being followed by virtually every mid-major program here.  By the end of the week that list had grown to include some high majors as Basabe couldn’t have done much better for himself in the last four days.

Theodore Boyomo – He’s so strong and aggressive that he simply dominates the glass.  Even against the top competition in the all-star game his prowess cleaning the backboards was unmatched.  He also erased his teammates mistakes on the defensive end with his shot blocking and dunked hard around the rim.

Deshawn Murphy – The Connecticut native is a versatile prospect who combines many different elements to his game.  In one sense he can be a beast of a physical presence near the rim, but he can also step to the perimeter and knock down threes.  In fact, he had four three-pointers in the all-star game.

Ike Azotam – He was all beast as his bread and butter lies within six feet of the rim.  He rebounds everything in his area, finishes around the rim, and in general plays much bigger than he actually is.

Ryan Romich – His athleticism shined through this week as he got his head on the rim on a number of different occasions and in general had a very consistent four days.  He leaves with his first scholarship offer as Colgate is hoping to land the versatile forward.

Evan Kelly – His performance was enough to at least put him into the division I equation as his talent with the ball and high arching three-point stroke had coaches taking notice.

Tylon Smith – He wasn’t necessarily a standout at any one time, but he scored consistently every time out as he got the hoop and connected with his jumper.

Tafari Whittingham – The rising sophomore from Avon Old Farms had a bit of a breakout performance earning much deserved recognition from the coaches on hand.

Remy Pinson – It remains to be seen if the Trinity Catholic guard did enough to get himself into the scholarship discussion, but he’s a quality NESCAC level guard at worst.