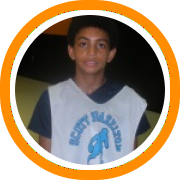 This year, the Scott Hazelton Basketball School once again showed off some of the best up-and-coming talent in the North Shore and New Hampshire. The following middle-schoolers stood out at camp this week after winning camp all-star/camper of the day awards, proving that they have the talent it takes to make a name for themselves in years to come:

Geo Baker, 5’4 7th grader, Derry Middle School(NH)-An easy pick for middle school camp MVP, Geo dominated all week using his superior ball handling and exceptional court vision to tear opposing  defenses apart. Defensively, he drove opposing guards crazy, stealing the ball often, which at times appeared to be at will. He has the talent to be a dominant high school point guard.

Jacob Coleman, 5’2 8th grader, Londonberry Middle School(NH)-  Jacob’s vision is a step ahead of other players, he sees things on the court far before they even happen. His mid-range to outside jump shot is dangerous, his ball handling was better than most players at camp, and he couldn’t be stopped on his way to the rim.

Cam Zahner, 5’6 8th grader, Melrose Middle School(MA)- 5'6-Cam showed to be a strong, crafty finisher all week at camp. He often showed off a steady mid-range jumper, and rebounded very well for a player his size.

Jack Zimmerman, 5’4 8th grader, Bedford Middle School(NH)-Jack made plays on a regular basis. He finished going to the basket, shot well from mid-range, and always continued movement without the ball.

Max Winters, 6’ 7th grader, McCarthy Middle School-Chelmsford(MA)-A skilled big man who is only going to get more dominant as he grows, Max has a great motor and moves well for a kid his size and age. He runs the floor well, rebounds aggressively, and alters shots with his long reach. He’s going to have a bright future if he continues to grow.

Mike Battaini, 5’4 8th grader Consentino Middle School-Haverhill(MA)-Mike made things happen offensively all week. He is very assertive on the offensive end, and had some nice finishes when he attacked the basket. As he gets stronger and develops more range on his jumper, he’ll be a dangerous weapon with the ball.

Jacob Greer, 4’7 7th grader, Timony Grammar School-Methuen(MA)-Though he lacks height, Jacob makes up for it with pressure defense, as well as selfless passing on the offensive end. He needs growth spurt for sure, but he’s a high IQ player.

Chad Dicenzo, 5’ 7th grader, West Middle School-Andover-Chad has a quick first step and used it to his advantage, even when being guarded by bigger guys. If he continues to grow and get stronger, he will be a tough guard to stop because of his driving ability.

Jared Gott, 5’8 8th grader, Woodbury Middle School-Salem (NH)-Jared is a promising forward who always gets very good looks offensively because of his ability to move without the ball. He is at his best when he plays physical down low, a side he showed in flashes during his week at camp.

Lee Blumsack 4’6 7th grader North Andover Middle School(MA)-Lee is another intelligent guard that is in need of growth spurt, he showed a strong handle and penetrating ability this week.

Brian Cardinal, 5’2 7th grade, North Andover Middle School(MA)-Brian showed very quick first step when driving to the basket, and he also knocked down a mid-range jumper every once in a while. He was impressive defensively when he didn’t let up the pressure.

Manny Sanchez (Timony Middle, Methuen, MA)
Sanchez is a  strong player with good fundamental skills.  Sanchez was best dominating the glass.  Sanchez has a huge upside. He is large for his age and can do a little bit of everything.

Mike Makiej (High Plains, Andover)
Makiej has a great nose for the ball and always seems to come up with the 50/50 balls.  Mike is young but he likes to mix it up with the older kids.

Cooper Ozoonian (Windham Middle, Sindham, NH)
Ozoonian creates has game and knows how to create space using his dribble and with his strong body.  He is undersized, but he plays much bigger.

Chris Rinaldi (Doherty Middle, Andover MA)
Rinaldi is a solid player that does some of everything.   He has a good skill set and adds excellent effort.

Dan Sarro (North Andover Middle, MA)
Sarro is a solid player that understands the game of basketball. He plays unselfish basketball and knows how to make his team win.