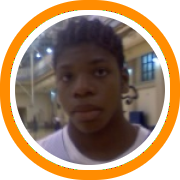 There was a nice blend of talent in Yale’ gym on Sunday as the Hall of Fame’s Junior/Senior Showcase featured both some big names as well as some guys flying under the radar.  Guys like Majok Majok, Eric Jean-Guillaume, Xavier Pollard, Robert Harrigan, and TaQuan Zimmerman all played extremely well as you would expect, but it was the emergence of some new faces that was really the story of the day.  Here’s a look at some of those guys:

Aru Kok, South Kent (CT):  was scoring on the block, knocking down the 18 foot jumper, and blocking shots on the weak side of the floor

Justin Kuntz, Sheehan (CT):  Available senior who impressed college coaches in attendance.  Made plays on both ends of the floor…especially in transition.

Walter Mfuko, Wilbraham & Monson (MA): Another uncommitted senior guard who showed his ability.  Would be a great division III addition.

Doug Soutar, Windsor (CT):  Not really flying under the radar because he’s been productive for so long.  Got to the rim and dunked consistently throughout the day.

B.J. Cardarelli, East Catholic (CT):  A big man who showed a very nice skill set in morning drill stations and a fundamental approach to both ends of the floor once the games began.

Ellis Cooper, Northampton (MA): Athletic and strong big man who has all the physical tools.  Was extremely productive with his dribble and inside of the paint.

Scott Watson, Wilbraham & Monson (MA):  Has added a good deal of muscle in the last few months and was very aggressive on the offensive end of the floor.

Zach Askew, Vinal Tech (CT):  Another youngster who showed he was ready to emerge.  Long, athletic, and extremely active on both ends of the floor.

B.J. Kline, Crosby (CT):  A long lefty guard who showed a nice southpaw stroke from the perimeter and a couple of crafty passes

Dan Martin, East Longmeadow (MA):  One of the top scorers in Western Mass has always been terrific with back to basket.  Now rapidly improving on perimeter.