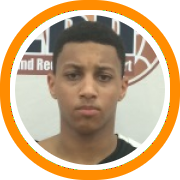 CHICAGO (March 17, 2016) — In its 31st year of honoring the nation's best high school athletes, The Gatorade Company, in collaboration with USA TODAY High School Sports, announced its 2015-2016 Gatorade Boys Basketball Player of the Year recipients in all 50 states.

Fleming, the 6-foot-6, 210-pound senior forward led the Vikings to a 15-5 record and the Class AA North semifinals this past season. Fleming averaged 27.8 points, 14.4 rebounds, 4.0 blocks and 3.7 steals per game. The Kennebec Valley Athletic Conference North Class AA Player of the Year, he was also a First Team All-State selection by the Maine Sunday Telegram. Fleming has maintained a 3.43 GPA in the classroom. A member of the National Honor Society, he has volunteered on behalf of youth sports programs. Fleming has signed a National Letter of Intent to play basketball on scholarship at the University of Maine this fall.

Brown, the 6-foot-2, 190-pound senior guard led the Pythons to a 23-2 record and the Division III state championship this past season. Brown averaged 28.5 points, 10.8 rebounds and 3.9 assists per game while shooting 63 percent from inside the arc. The 2016 Division III Player of the Year and New Hampshire's Mr. Basketball award winner, he scored 22 points with 13 rebounds in a 43-39 win over Kearsarge in the title-clinching game. Brown concluded his prep career with 1,978 points. Brown has maintained a 3.32 GPA in the classroom. A member of the Future Business Leaders of America, he has volunteered locally on behalf of an animal adoption program and as a youth basketball coach.

Mazzulla, the 6-foot-3, 185-pound junior guard led the Hawks to a 23-6 record and the Open State Tournament championship this past season. Mazzulla averaged 15.8 points, 10.6 rebounds, 3.0 assists, 2.0 steals and 1.1 blocks per game and was named the state championship game's MVP. He is a First Team All-State selection and played for the AAU national champion Boston Amateur Basketball Club last summer. Mazzulla has maintained a weighted 3.50 GPA in the classroom. He has volunteered locally on fundraising campaigns to benefit homeless shelters and food banks in addition to donating his time as a youth basketball coach and referee.

Shungu, the 6-foot-1, 200-pound senior guard led the Green Knights to a 20-4 record and the Division 1 state championship game this past season. The state's returning Gatorade Boys Basketball Player of the Year, Shungu averaged 21.9 points, 5.9 rebounds, 4.1 assists and 3.2 steals per game. The USA TODAY American Family Insurance ALL-USA Vermont Player of the Year, he was also the Metro League Player of the Year and was selected Mr. Basketball by the Burlington Free Press. Shungu has maintained a B average in the classroom. A peer mentor in his school, he has volunteered locally on behalf of youth basketball programs. He will attend the University of Vermont this fall, where he will play basketball.

Moyer, the 6-foot-8, 215-pound senior forward averaged 16.5 points and 9.5 rebounds per game while shooting nearly 60 percent from inside the arc this past season, leading the Cardinals (20-10) to the New England Preparatory School Athletic Council Class AAA semifinals. The state’s No. 2 recruit in the Class of 2016 as ranked by the New England Recruiting Report, Moyer averaged 21.5 points per game in the NEPSAC Class AAA tournament. Moyer has maintained a 3.61 GPA in the classroom. A member of the National Honor Society and an accomplished classical violinist, he has volunteered on behalf of an area soup kitchen and as a youth basketball coach. He has signed a National Letter of Intent to play basketball on scholarship at Syracuse University this fall.

Sellew, the 6-foot-7, 200-pound senior power forward has led the Patriots to a 23-2 record and the Division 2 state championship game, scheduled for March 19. Sellew is averaging 21.5 points, 13.7 rebounds, 4.4 blocks, 4.0 assists and 2.3 steals through 25 games. The two-time Dual County League MVP, he has recorded a double-double in every game this season, and he entered the final game as a high school player with a school-record 1,170 career points. Sellew has maintained a weighted 3.80 GPA in the classroom and represents one of the state’s top academic candidates in meeting the Gatorade award’s broad criteria. A budding entrepreneur who runs his own firewood business, he has volunteered locally with Gaining Ground Farming and as a youth basketball coach. He also donated his time to Hurricane Sandy relief efforts in New York. He will attend Amherst College this fall, where he will play basketball.

The Gatorade Player of the Year program annually recognizes one winner in the District of Columbia and each of the 50 states that sanction high school football, girls volleyball, boys and girls cross country, boys and girls basketball, boys and girls soccer, baseball, softball, and boys and girls track & field, and awards one National Player of the Year in each sport. The selection process is administered by the Gatorade high school sports leadership team in partnership with USA TODAY High School Sports, which work with top sport-specific experts and a media advisory board of accomplished, veteran prep sports journalists to determine the state winners in each sport.