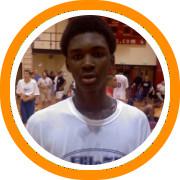 The freshman session included a variety of big names coming out of the middle school ranks including Jeremy Miller, Jared Wilson-Frame, and Levy Gillespie, all of whom continued to show well that day.

Johnnie Vassar, who has since left since left the New England region but still developed into one of the top point guard prospects in the national class of 2014, was also on hand.

One of the themes each year for the freshmen is new players announcing their arrival on the high school scene, and 2010 was no different.  Aaron Falzon, Jonathan Joseph, Bonzie Colson, Damion Smith, Jeff Spellman, Kahari Beaufort, Jalen Adams, Dustin Cole, Patrick Benzan, Winston Morgan, Jackson Donahue, and Idris Taqqee all made their respective debuts on the exposure circuit that day, and have all gone on to become notable prospects in the two years since.

The sophomore session read like a who’s who of New England’s top young prospects, but two players stole the show in Rene Castro and Noah Vonleh.

For Castro, the performance was really about solidifying his spot among the region’s best after a strong showing during the AAU season.  The Milton, Massachusetts native did just that as he was almost unstoppable scoring the basketball that day.

For Vonleh, the 2010 Elite 75 – Frosh/Soph was all about showing the growth of his game.  Already well known for his ability to handle the ball at his size, Vonleh broke people down off the dribble while also showing an improved perimeter jumper.  The bottom line was that no one left Boston University’s gym that day without realizing he was on his way to becoming a major national prospect.

The event was also a springboard for players including: Jared Terrell, who went on to have a breakout AAU season just six months later; Matt Cimino, who was one of the most improved prospects in the field that day; Jake Fay, who played his way into an Atlantic 10 scholarship offer in the months afterward; and Kaleb Joseph, who was less than a year away from propelling his stock to the national level.

The sophomore session was also a forum for newly arrived prep products to introduce themselves to the local competition as guys like DeKeeba Battee, Asur Madison, Travis Berry, and Dennis Green all made their debuts.

It wasn’t just basketball players who broke out at the 2010 Elite 75 – Frosh/Soph Edition as Lucas Shapiro was in the process of making an early splash as an up and coming media member – dropping one of his first highlight videos from his LShapiro Productions YouTube channel which featured Castro, Vonleh, and Andrew Chrabascz.

The 5th annual New England Elite 75 Showcase - Frosh/Soph Edition will be taking place in two weeks on Saturday, September 15th.  Player nominations are still be accepted and can be submitted via e-mail to adam@NewEnglandBasketballServices.com