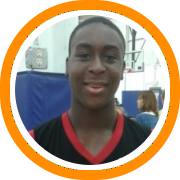 Expressions Elite came into the first ever “Live in A.C.” tournament riding a wave of momentum following last week’s run to the finals of the Hoop Group Summer Jam Fest and kept things moving in the right direction with an impressive three day performance.

Still playing without leading scorer Jared Terrell, Expressions continued to build their attack around big man Abdul-Malik Abu, who was absolutely tremendous for the second consecutive week, establishing himself as the premier post prospect in the tournament’s u16 field.

Abu put up 26 points and 15 rebounds in a 69-53 win over the New Jersey Pirates and followed that up with 19 points and 16 rebounds in a 74-24 pounding of the Juice All-Stars.  Meanwhile Damion Smith asserted himself, in Terrell’s absence, as the team’s primary playmaker in the backcourt with 22 points against the Pirates and 24 against Juice.

Expressions faced off against We R 1 in Thursday night’s quarterfinals and ran away with a 60-39 win behind 24 points from Smith and 13 points and 17 rebounds from Abu.  The semifinals saw another big win, this time over Team Final, who had no one to combat the size and sheer physical dominance of Abu inside the lane.

With the win, Expressions advanced to their second consecutive tournament final only to find Team Takeover waiting for them.  Expressions battled valiantly, cutting into Takeover’s lead at multiple points throughout the second half and ultimately falling in a hard fought 58-51 decision with the likes of Maryland head coach Mark Turgeon, Providence head coach Ed Cooley and West Virginia head coach Bob Huggins all looking on.

Johnnie Spears and Juwan Gooding both competed at a high level in the final, knocking down perimeter shots and holding their own against Team Takeover’s high-major backcourt.  Alec Brennan was solid throughout the three day period as he continues to show his development and improvement as of late.

Expressions wasn’t the only squad to make waves this weekend.  The Rhode Island Hawks took a lot of people by surprise this week, both in the u16 and u17 division.

The Hawks 2014 Black team has been playing at a high level all month and continued to stand out this week.  They took two “upset” wins over Sports U and The City to win their pool and advance to the gold bracket, before ultimately falling to the New Jersey Playaz in the quarterfinals, in a game in which they shot just 2-23 from behind the three-point line.

The Holderness frontcourt tandem of Willem Brandwijk and Mike Hogervorst continued to play off each other extremely well in the paint while the team’s typical three guard rotation of Jackson Donahue, Kealen Ives, and Henry Bolton got an added boost from the addition of Ian Sistare.

The Hawks 2013 Black team made a surprise run to the semifinals of the u17 bracket, before falling to the eventual champions, Team Takeover.  The Hawks scored pool play wins over Positive Direction 87-79 and Ottawa Guardsmen 60-55 before knocking off the New York Lightning on Thursday night and then Philly Pride on Friday morning.

Sam Donahue knocked down five three-pointers against the Pride while he, Charles Correa (17 points) and Pete Weston (16 points) headlined the win over the Lightning.  Weston scored a team high 20 points on five threes over Positive Direction while Colin Pascoe added 11.  Thomas Rivard and Max Motroni led the way against Ottawa while Colin Richey created scoring opportunities with his passing.