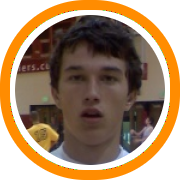 Evan Tullar – The 6’4” sophomore from Spaulding High School made quite a name for himself on Saturday as he proved himself not only to be a talented player, but also a very intelligent one.  His high basketball I.Q. was on display all day long.  He is an unselfish player who passes the ball extremely well for someone his size.  He also has a solid floor game including a good sense as to when to attack the defense and when to move the ball.

Making Tullar even more impressive was his athleticism and high motor.  Although he didn’t quite get it to go down, he was the only player at the showcase who attempted a tip dunk coming off the offensive glass.  Tullar is also a hard-working player who knows what it is to compete on both ends of the floor.  Overall, his many talents made him an easy selection for the sophomore all-star game.

Jake Donnelly – The Champlain Valley Union offense looks to be in steady hands for the next three years as Donnelly proved he is more than up to the task.  What jumps out first about Donnelly is his size and strength for the point guard position.  He stands a legit 6’2” and already features a good amount of muscle throughout his upper body.  But he also has plenty of game.  He was good with the ball, showed an ability to go hard to the rim, and made shots behind the three-point line when his feet were set.

Jaren Scrubb – This athletic guard could be a player on the rise in Vermont’s class of 2011.  The Stowe High School product is an impressive athlete who appears poised to be playing above the rim in only a matter of time.  And while he can put the ball in the basket in a couple of different ways it may be his ability on the defensive end of the floor that really sets him apart as there were few others who could hawk the basketball quite as well as Scrubb.

•  Ben Ferris did some nice things and looked ready to challenge for one of the starting guard spots at Essex High School in just his sophomore season.

•  Donnelly wasn’t the only CVU product who was in attendance, as his backcourt mate Ryan Pierson was not only in action but also effective putting points on the board when he got the opportunity.

•  Austin Robinson didn’t do any one thing to jump out at you, but it was obvious watching his feel for the game that this was a player with plenty of natural ability.

•  Matthew Field may stand at only 5’4” but if the Thetford Academy freshman continues to compete at such a high rate, it won’t be long before he is able to make an impact at the high school level.