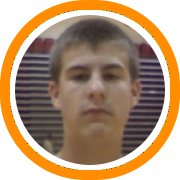 All of the top young players in the state of Maine made the trip south to Boston University’s Case Gymnasium last Saturday for the New England Elite 75 Showcase – Frosh/Soph Edition.  Here is a look at how they performed:

Tyler McFarland, 6’5”, F, Camden Hills HS – McFarland was one of the more productive players in the entire field.  He forced the action a little bit at the beginning of the day, but then settled into a good groove using his size and versatile skill set to create mismatch problems.  On the interior he was rebounding in traffic and showing a nice jump hook with his back to the basket.  But he was also plenty comfortable handling and passing the ball in the open floor as well as knocking down his patented mid-range pull-up.

Graham Safford, 6’1”, G, Camden Hills HS – Safford has more physical tools than many of his peers with a pretty strong and athletic frame that allows him to get a lot done.  He made a variety of plays off the dribble showing a good knowledge of when to attack close-outs, a nice mid-range game, and an ability to finish against contact with both hands.  Overall, a great performance for one of the field’s best two-guards.

Andrew Shaw, 6’5”, F, Thornton Academy – Shaw has good size and a soft shooting touch.  He scores on the interior with a turn-around jumper and finishes strong against contact, but can also step to the perimeter and make shots.  Right now he’s probably best suited as a face-up four man but he could potentially be a big wing down the road, which gives him a high upside.

Alex Furness, 6’4”, SG, Wells HS – Speaking of potential, Furness has a lot of it.  He isn’t quite used to the speed or physicality of the game when matched up with the best players in 2011, but he has great size for the shooting guard position and an impressive skill set.  It should be a fun to watch him develop over the next three years.

Josh Walker, 5’8”, PG, Mt. Ararat HS – A very crafty point guard who is a tremendous passer, especially in the open floor.  Walker has a great feel for the game and practically ambidextrous passing ability.

James Ek, 5’10”, G, Portland HS – Ek is a heady player with a very high basketball I.Q.  He makes good decisions with the ball, shoots it well and with range, and passes well in a variety of situations.

Will Defanti, 5’10”, PG, Portland HS – As trust worthy a player as there is in the class of 2012 with the ball in his hands.  He showed great poise for a young player on Saturday, making good decision after good decision and getting the ball where it needed to go.  Don’t sleep on his ability to score himself though as he will take whatever the defense gives him.

Chris Braley, 6’1”, SG, Nokomis HS – Braley didn’t really get the type of touches to put a lot of points on the board, but if you watched closely enough you could see plenty of flashes of his potential

Nolan Allen, 6’2”, G/F, Windham HS – Allen played a well rounded floor game on Saturday, not dominating in any one particular area but doing a number of things well.  Consequently, he was selected by the showcase’s coaching staff to participate in the Freshmen all-star game.

Cam Olsen, 6’1”, SF, Cheverus HS – The swingman from Cheverus High School scored a few impressive buckets by making plays in the open floor, slashing his way to the bucket, and converting around the rim.