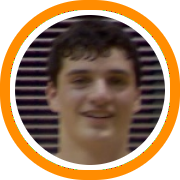 Anthony Jernigan and Jerome Harris are two of the better known sophomores in the state of Connecticut…and they proved why last Saturday as both guards were dominating the competition.

Jernigan was up to his usual tricks – shaking defenders with his unmatched handle to create scoring opportunities for himself and others.  But more than any prowess with the basketball, “Ant” just has a poise and quiet confidence that allows him to control the game virtually every time he gets on the floor.

The showcase style atmosphere is ideally suited for Harris to thrive.  He is a tremendous athlete who can make plays with the dribble and finish high above the rim.  He drew the biggest reaction from the crowd after he stole the ball in the backcourt, went by an oncoming defender with a quick behind-the-back move, and then cocked the ball back for a hard one-handed dunk.

Rohan Brown, 6’6”, PF, East Catholic HS, 2011 – His game is never flashy, but always efficient.  He has a very high motor and is very active around the basket on both ends of the floor.  He just plays harder than everyone else which is why he is a guaranteed double-double guy even in his sophomore year.

Darryl Best Jr., 6’6”, C, Career Regional, 2011 – The big fella is getting a lot better.  He posted strong, scored over both shoulders, and showed flashes of a jump hook that could eventually be dominant.

John Papale, 6’3”, G/F, Sheehan HS, 2011 – He’s super smooth on the perimeter.  Has great touch on his jumper and can stroke it from behind the arc or pull-up with just a little space.  Once he learns to be more assertive, he could be a star on this level.

K.C. Hoff, 6’5”, PF, Career Regional, 2011 – He was doing a little bit of everything –
scoring and rebounding inside, but also keeping defenders honest with some improved ball skills on the perimeter.

Adam Schrecengost, 6’7”, C, Kingswood Oxford, 2011 – A newcomer to the region with a lot of tools.  The K-O big man has a soft touch around the rim, a good feel for the game, and a good understanding of how to contest shots without fouling defensively.

Scott OBrien, 6’0”, PG, New Canaan HS, 2011 – A creative point guard with a little flair to his game.  Handles and passes well and has a decent three-point stroke that he needs to utilize more.

Steve Santavenere, 5’11”, PG, East Catholic HS, 2011 – His speed from baseline to baseline is virtually unmatched.  He is a one man fast-break who was making good decisions with the ball while in first gear.

Daniel Chase, 6’2”, G/F, Hamden Hall, 2011 – A guard who presents mismatch problems because of his size and strength on the interior along with his perimeter skill set.  He also owns a great feel for the game.

Drew Crudup, 5’11”, G, Career Regional, 2011 – A strong guard who attacked the defense proficiently with his dribble and made a lot of plays in the open court.

Mick Kelly, 6’1”, G, RHAM HS, 2011 – Lights out from behind the arc when his feet are set, but he has some swagger to his game and will get to the rim and finish if defenders crowd him.

Angel Ortiz, 5’8”, PG, East Lyme HS, 2011 – One of the day’s most pleasant surprises.  Physically strong guard who played within himself, made open shots, and got to the rim when the opportunity presented itself.

Up and Coming Freshman

Zach Restifo, 6’2”, SG, Kingswood Oxford, 2012 – A “pure shooter” as his coach called him who was automatic when open behind the arc.  But he was just as good when defenders rushed at him, scoring intelligently with a bounce or two.

Sam Donahue, 6’0”, G, Stonington HS, 2012 – Has an obvious love for the game and competitive drive.  Talented guard who really shoots it and is pretty good with the ball.

Darrius Edwards, 5’8”, G, Maloney HS, 2012 – He showed some good skills with the ball in his hands including a good handle with some quick changes in direction.  He also made some shots from the perimeter.

Daquan Grant, 6’0”, G, St. Thomas More, 2012 – Probably the CT frosh with the highest upside.  He goes hard to the rim and is a jump shot away from being a very special young player.

Arkel Miles, 6’3”, PF, Notre Dame Fairfield, 2012 – A bruiser inside who throws his body around, scores, and rebounds the ball.  Look for him to play immediate minutes at Notre Dame.

Casey Woodring, 5’11”, G, Notre Dame Fairfield, 2012 – A young Derek Retos.  Hasn’t quite grown into his game but he is a very dangerous catch and shoot player who has a good feel for the game and is more than willing to make the extra pass.