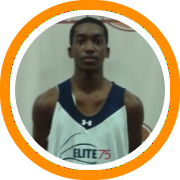 The 5th annual New England Elite 75 Showcase – Frosh/Soph Edition lived up to the expectations created by its predecessors by showcasing some of the very best young talent the New England region has to offer.

The morning session began with an introduction to the region’s premier freshman.  Ian Sistare, arguably the only already established prospect in the class after repeating his freshman season, stood out by letting the game come to him and picking his spots, while several other 2016 prospects announced their arrival on the exposure scene including the likes of Tyrique Jones, Saul Phiri, Charles Fisher, Greg Kuakumensah, Terrell Brown, and a variety of others.

The sophomore session had its own fair share of participants who played their way onto the NERR prospect database for the first time including the likes Lavar Harewood, Elijah Pemberton, Steven Enoch, and Jesse Wims.

The real story of the sophomore session was the dominance of Terance Mann, who seized the opportunity to stand out, while Wilbraham & Monson’s six-foot-seven guard Luis Monteiro demonstrated why everyone has been raving about his talent and potential since his arrival.

Aaron Falzon and Jonathan Joseph both lived up to the hype that their early careers have generating while another of the class’ most celebrated prospects, Josh Sharma, had his day cut short by a nagging knee injury.

Like its predecessors from previous years, the 2012 showcase also proved to be the perfect forum for a variety of sophomores to show off recent improvements to their game.  Andrew Simpson, Toriola Moses, A.J. Brodeur, and Roy Kane Jr. were atop that list.