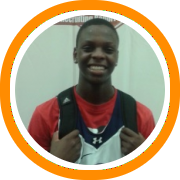 At this level in a freshman’s development it’s only impossible to sort the wings from the guards just yet and so in this case the term “wing” really reflects those perimeter oriented players with good size.  Here is a look at some of the most notable prospects and performers:

Saul Phiri, Haverhill (MA) – He announced his presence on the AAU circuit this summer and looks poised to be the next high level prospect to come out of Merrimack Valley.  He has all the physical tools to become a great scorer – he’s strong, can get off his feet, and never fears contact.  Count on him to make some noise this coming winter season.

Matt Donahue, Stonington (CT) – He’s still developing a consistent outside shot, but Donahue looks destined to be the latest star to come out of the Donahue family given his athleticism, skill set, and a killer mentality with or without the ball in his hands. Matt hit several tough shots throughout the day.

Greg Kuakumensah, St. Peter-Marian (MA) – Cedric’s young brother has all the same physical tools you would expect.  Greg is a long 6’3 forward who is a true inside-out scorer; he embraces contact going to the rim and did some nice work at Elite 75 of creating for his teammates.

Ryan Murphy, Fairfield Prep (CT) – A big-time energy guy with a motor that never stops, Murphy was all over the floor defensively with deflections, blocks, steals and defensive rebounds.  Offensively, he’s an aggressive scorer with a strong outside stroke and the short memory necessary to be an elite scorer.

Nick Seretta, Northfield Mount Hermon (MA) – Seretta is a hard-nosed guard whose standout characteristic is offensive efficiency. Even in a showcase environment, he always makes the extra pass or drive-and-kick that every high-level offense must have.

Eric DAguanno, Marianapolis (CT) – A sturdily built swingman who is best known for his prowess as a catch and shoot player, D’Aquano slid over to play the big guard spot showing his ball-handling and creativity in the open floor.

Justin Gurette, Cape Elizabeth (ME) – He impacts the game in a variety of different ways.  He’s active with a good nose for the ball and so he defends and rebounds with the best of them.  Offensively, he handles well enough to get to the rim and finishes a high percentage in close.

Tshiefu Ngalakulondi, Manchester Memorial (NH) – A long and athletic swingman with the physical prototype to be a player down the road, Ngalakulondi is long and quick, making him as much of a potential factor on the defensive end as he is on the offensive end.

Kent Ellerston, Beaver Country Day (MA) – He has the look of a guy that isn’t done growing and yet he already attacks the rim with good burst off the dribble.  He plays the game with a good motor, can operate at full speed, and has some noticeable upside.

Devante Rose, East Providence (RI) – You have to watch closely in order to appreciate the multitude of ways in which he can impact the game.  He’s mature beyond his years in terms of his offensive footwork, a diligent rebounder on both ends, and a committed on the ball defender.

Joe McNamara, Providence Country Day (RI) – Able to physically overpower most of his peers, McNamara can create mismatch problems around the basket but also has ability to produce when facing the rim.  A couple of his outlet passes were particularly impressive following a defensive rebound.

James Mortimer, Lincoln-Sudbury (MA) – A fundamentally sound player with a well balanced floor game, Mortimer was effective as a penetrator but also had a nice catch-and-shoot dimension to his game.  He even got after it defensively, and impacted the game on both ends of the court.