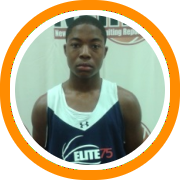 Tyrique Jones came into the 2012 New England Elite 75 – Frosh/Soph Edition as a relative unknown at the high school level, but left the freshman session as the player everyone was talking about.

Jones is big, strong, and without that awkward quality that most young big men possess.  He has a nice mid-range jumper and often uses his go-to drop step move to score on opponents on the low block. He has flashes of being a monster physically, so as he continues to work out and get stronger, the sky will be the limit for him.

Terrell Brown, St. Andrew’s (RI) – Six-foot-six with long arms, Brown has shown that he has all the physical ability needed to be a star player. He has solid footwork on the low post, can finish around the rim, and uses his long arms to reach for tough rebounds and alter the shots of opposing shooters.

J.T. Riddick, Sacred Heart (CT) – A long lefty pogo stick type who covers the court with ease, has good natural touch, and a quick second bounce, Riddick has the physical tools to evolve into a solid prospect if he continues to work on his game and body.

Davidson Pacheco, New Leadership (MA) – This is a big man with the potential to be a star at the high school level.  He flies up the court in transition, never takes a play off, and gets his team second chance points.  That energy will serve him well in the future, especially given his impressive physical talents.

Perry DeLorenzo, Middlebury Union (VT) – He’s a mismatch problem waiting to happen with the size and strength to play in the paint and the skill to step away and drill jumpers.  DeLorenzo rebounded the ball well on both ends and made shots out to the arc.

Bruce St. Peter, Ellsworth (ME) – He’s very proficient around the rim with terrific hands and the ability to score with both his right and his left.  He plays primarily under the basket at the high school level but projects as someone who will face the rim at the next level.

Ross Carter, Rivers (MA) – He’s more of a forward than a true big man but he does a nice job of being physical and throwing his body around on the low block, and so he’s able to physically compete and produce against bigger players.

Ben Murphy, Newton North (MA) – He doesn’t yet have great size for the post but he’s still adept at getting to his sweet spots because he works for deep position on the block prior to his catch, has terrific footwork, and a strong body to bang.