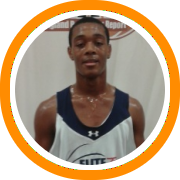 Yesterday we told you which prospects in the 2015 class announced their arrival at the Elite 75 Showcase – Frosh/Soph Edition, now it’s time to take a look at the biggest stock risers in the class.  Here’s a look at some already known prospects who have recently taken their games to new levels:

Andrew Simpson - A physical-specimen of an athlete, Simpson is a playground bully off the dribble and finishes through contact with ease at the dish.  Frequent-flyer who makes plays above the rim and has the ability to finish over the top with thunder.

A.J. Brodeur – Another player who has experienced a physical transformation in the past year, filling out, getting much stronger, and adding elements of explosiveness and physicality to a versatile skill-set make the 6'7" Brodeur a bonafide D1 Prospect heading into his sophomore campaign.

Toriola Moses – He’s made drastic strides over the last two months, and appears far stronger with better balance than he was in mid-July.  He’s a coordinated kid, so his skill-set will develop steadily, and with what appears to be a serious desire to be a player, and athleticism plus the height and length you can't teach, Moses is all over the radar.

Roy Kane Jr. – He intrigued a lot of people with his performance at this event last year and twelve months later he’s added two plus inches to his frame, noticeable muscle mass and ability to play through contact, and the skill set to play on the perimeter and create his own offense off the bounce.

Steven Daley - After coming up the ranks as a post-player, Daley has really developed his perimeter skills in the past year. On Saturday, he showed as an athletic combo-forward who gets all over the glass and guards multiple positions while also showcasing an ability to score the ball around the basket, in-transition, and from the mid-range.

Crew Ainge – He’s just starting to come back after a long absence due to a wrist injury, but even with a wrapped hand there still weren’t any signs of rust as he handled the ball with confidence, weaved in and out of defenders, and got progressively better as the day went on.

Sultan Olusekun – Having added significant upper-body strength since July, Olusekun had a great day going head to head with some of the region's top sophomore point guards.  The added strength allows for him to play more effectively through contact and gives him that little edge defensively where he is able to subtlety knock opposing ball-handlers off-ball.  No doubt a significant development for Sultan as a prospect.

Corey Daugherty – The Barrington guard doesn’t stand out at first glance, but the more you watch the more you like him.  He’s skilled and cerebral, able to do damage with his pull-up as well as his three-point range, and consequently able to make the type of plays that translate to the next level.

Oumaru Kante – He’s been hard to find since making his debut on the circuit at this event last year.  In his encore performance, Kante showed the same scoring and passing instincts that intrigued us last year, along with a quality feel for the game.

Wenyen Gabriel - A versatile performer who understands how to use his length to his advantage on both ends of the floor.  Guards multiple spots on the defensive end and looked good on Saturday playing a complimentary front-court role on the offensive end.  Swoops in for rebounds at both ends of the court.  Lot of upside with Gabriel.

Clinton Davidson – C.J. has his handle on a string and can break opposing defenders down at will.  What differentiated him from the other playmaking guards in the field was the fact that he was looking to create for others, particularly finding shooters in drive and kick action.

Blair Howard – The latest in a rapidly growing line of talented guards to come out of Capital Prep, Howard is another creative driver with quickness and matching handle.  He swings for the fences and is capable of making some very high level plays.

Kobe Ancrum – The Bassick guard has the physical tools to stand out with a well built frame and easy bounce around the rim, but what stood out on Saturday was the quality of his intangibles as he hustled to cover the court and dove on the floor for loose balls all while making plays in the open court.

Aidan Wright - A multi-faceted player from the Wheeler School in Rhode Island, Wright played his way into the top 20 all-star game by both drilling deep jumpers and attacking the rim off the dribble.