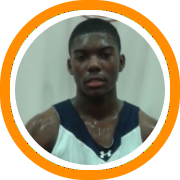 Every year the Elite 75 – Frosh/Soph Edition serves as a forum for a variety of prospects to announce their arrival on the exposure circuit.  This year’s event was no different.  Here are the biggest breakouts from the sophomore class:

Lavar Harewood – The New York native is in his first season in New England after transferring into Brooks and he made a statement in his first exposure event in the region.  He was all over the rims, throwing down a variety of dunks and showing off a sculpted physique in the process.

Jamal Lucas – Another New York native who recently made the move into New England, Lucas will be starring for the Kent School this year.  He has the physical tools to stand out with good size and athleticism along with a quick first step, but also caught our attention with his unselfish floor game.

Elijah Pemberton – This guy’s been on the radar for a while but seems to have really taken his game to new levels as of late.  He’s got the type of sneaky athleticism that allows him to play above the rim and do so with body control, but is also skilled enough to hurt opposing defenses with his jump shot.

Jesse Wims – Belmont Hill will have a big man roaming the paint this season as Wims appears poised to make a big impact during the high school season.  He runs the floor well, finishes, is skilled in the post, and even showed the ability to step out and make the 17 foot jumper.

Koree Hargraves – He joins a solid young core at the Canterbury School where he promises to be an especially good fit because of his high basketball I.Q. and good feel for the game.  Hargraves impressed with his instincts for the game and passing ability, even in this showcase setting.

Steve Enoch - Thick, long-armed 6'7" wide-body who is light on his feet and possesses soft-hands and a soft-touch.  Major player on the boards at both ends with keen shot-blocking instincts.  Big Steve has a high-ceiling and will combine with fellow-sophomore Roy Kane Jr. to form a huge interior duo for Norwalk High School (CT).

Darrick Boyd – Put his name on the radar by standing out as a true floor general with physical strength and a terrific feel for the game.  Boyd understands how to run a ball-club and makes smart decisions with the ball in his hands. Has a real feel for using the bounce to get into the lane, where he'll look o dish or go to work with a leaner or a floater.

Denis Tobin - Hard-nosed combo-guard who plays a cohesive brand of team-ball.  Looks to facilitate for his teammates in every way, whether off the drive and kick, by setting a no-nonsense off-ball screen, or off the dribble hand-off.  Also has the ability to put the ball in the hole when the opportunity is there.

Chris DiClemente - Strong-bodied wing who can score the ball in a number of ways.  He'll take the ball strong to the rack and look to create contact and finish at the basket.  DiClemente also can put the ball in the hole from the outside, and on Saturday showed a partiality to using and calling glass from the wing.

Johnny Hilaire - A long and wiry 6'6", Hilarie is an athletic front-court prospect with a developing skill set and tons of room left to improve.  Runs the floor very well, gets all over the offensive glass, has the ability to make plays above the rim, and has the tools necessary to guard multiple positions.

Andy Kaplan - After missing much of last year with an injury, Kaplan was back in action on Saturday and had an impressive showing.  Long and smooth out on the wing, Kaplan can get to the basket and score the ball, both in transition and off the one-dribble-drive from the wing. Also shoots the ball well from the outside and has knock-down ability from long range.

Hilal Dahlel - Left-handed catch and shoot specialist who looks to attack close-outs to get into his efficient mid-range pull-up game.  Sees the floor from the perimeter and impressed on Saturday with his understanding of how to effectively enter the ball into the post.

Zach Jones - Long and lean hard-nosed southpaw point guard who slashes in small spaces to get into the lane and create offense. Certainly a guy to keep an eye on moving forward.

Eric Rosario - Talented point guard who showed terrific court vision in the open-floor.  Use his athleticism to penetrate with the dribble and attack the basket in order to manufacture offense for himself and others.

Geoffrey Gray - Solid south-paw point guard who is talented with the ball in his hands.  Efficient ball-handler and a smooth knock-down three-point-stroke.  Should have a nice year at Newton South (MA).