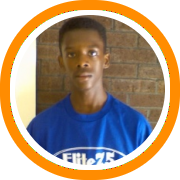 Giving underclassmen a chance to prove themselves is the entire philosophy behind the New England Elite 75 Showcase – Frosh/Soph Edition.  Some freshmen really took that opportunity to heart this weekend.  Tops among them was Cornelius Tyson, who we told you yesterday played his way into the top three players in the event, but the Springfield Central freshman was just the tip of the iceberg when it came to players making a name of themselves.

Kamari Robinson, Springfield Central HS (MA) – Ironically, it was Tyson’s Springfield Central teammate who caught our eyes the most.  He’s made significant strides since last spring when he played at the Junior Elite 75 Showcase as an 8th grader.  Now, Robinson boasts a strong frame with good explosion in both his leaping ability and first step.  He looked a lot like a point forward this weekend as he would elevate over the pack to grab rebounds, push the ball up the floor himself, and then either finish it or pass to others.

Colin Richey, Whitinsville Christian (MA) – This guy literally came out of nowhere.  We didn’t even remember hearing his name prior to weekend’s event, but he certainly proved himself worthy of being included in the field as he showed off a very fundamentally sound skill set and terrific understanding of the game.  He was crafty getting to the rim, changing speeds and being efficient with his dribbles, while also being a capable shooter of the long ball and a terrific passer.  He was easily one of the more intelligent and well schooled players on hand.

Cane Broome, East Hartford HS (CT) – Broome first came onto the scene this summer at the Hoop Mountain Junior Elite Camp when he dominated with his ability to score off the dribble.  It was more of the same this weekend as he competed, and thrived, at both the Hoop Mountain Fall Classic on Friday night and then the Elite 75 on Saturday.  He was impossible to keep out of the paint on both nights as he has the ball on a string with his handle, a quick first step, and good court vision as well.

Jaquille Taylor, Cambridge, Rindge & Latin (MA) – With Taylor it’s not so much what he is right now as much as it is what he could be down the line.  He currently stands six-feet-seven-inches off the ground but appears to still be growing and with extremely long arms and quick feet he is going to end up with all the physical tools he’ll need.  His motor is also impressive as Taylor is very active on both ends of the court, flying around and getting his hands on a lot of balls.

Riyad Asad, West Springfield HS (MA) – Not to be outdone the third member of the Springfield trio was extremely impressive in his own right.  He’s another guy who has really improved since participating in the Junior Elite 75 Showcase last spring.  He’s become an extremely smooth and versatile scorer who puts the ball in the basket in a variety of different ways.  It’s hard to imagine him not making an impact at West Springfield this year.

Nick Bland, Milton Academy (MA) – Much like Colin Richey, Bland managed to stand out because of his well developed fundamental skills and high understanding of the game.  He rebounded well, made several nice passes, and scored in the flow of the offense.  The bottom line is that the kid just knows how to play and with good size and a strong frame to match you can bet that Milton Academy head coach Lamar Reddicks will maximize his potential and find ways to utilize his many talents at Milton Academy.

Johnnie Vassar, Hillside School (MA) – Not necessarily you’re typical “breakout performer” because many people already know about him, but considering he’s a year young for his grade and didn’t really hit his stride until later in the day, he still left people impressed.  He’s a lefty who is just as comfortable going right, and shows no fear attacking the defense and making plays.

Nate Anderson, Roxbury (MA) – A big man with long arms who showed some flashes of eventually becoming a force in the paint.

LQuan Arnum, Dartmouth HS (MA) – Very skilled with the ball in his hands with good burst and quickness.  He’s a growth spurt away from really breaking out.

Will Cartwright, Piscataquis Community HS (ME) – A big man who wants to play on the post with great ambiguity around the rim.  He may have actually scored more with his left than right.

Tom Hunt, LaSalle Academy (RI) – He’s got the total package offensively as he can stroke the ball from the perimeter as well as get to the rim.

Tanner Hyland, South Portland HS (ME) – Not necessarily the shooter that big bro Keegan is, but value is in being pure point guard who knows how to get others shots.

Zaman Kalilou, Windsor HS (CT) – Scored in double figures in both games and is just beginning to scratch surface of potential with frame that is far from filled out yet.

Tevin Montgomery, Boston Trinity (MA) – Big body who can score, rebound, and punish others inside.  Showed some toughness playing through ankle injury as well.

Reynaldo Perez, Durfee HS (MA) – The air apparent to Mike Rivera gets where he wants to with his dribble and earned all-star honors consequently.

Dan Upchurch, Notre Dame HS (CT) – Doesn’t necessarily show too well in showcase style setting because game is all substance and no flash…but he can play.

Bobby Ahearn, Marshfield HS (MA) – Great understanding of how to play in paint for a youngster.  Has footwork, strong body, and soft touch.

Aaron Calixte, Stoughton HS (MA) – Has gear beyond most others and uses it to make plays on both ends of the floor.