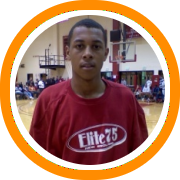 New England’s sophomore class has a chance to go down in history as a very special group featuring the likes of Andre Drummond, Alex Murphy, Nerlens Noel, Kaleb Tarczewski, Ricardo Ledo, Domonique Bull and others.

But 2012 is just as deep as it is talented at the top with a series of other prospects flying somewhat under the radar due to the high-major buzz a select few are already generating.

Break Out Performer of the Day

Rodell Wigginton, Boston Trinity (MA) – He came out of nowhere and emerged to provide the single best performance of the day among the sophomores.  A swingman with a sturdy build, explosive athleticism, and ample ball skills, Wigginton seemingly has all the tools necessary to thrive in the foreseeable future.  He got to the rim consistently, showed a good shooting stroke, posted up smaller defenders, and put the punctuation mark on the day with a rim rattling break away dunk that brought the crowd to their feet.

Tim Jackson Jr., Danbury HS (CT) – His was a name we hadn’t heard before September, but everyone knows his name now as he officially arrived this Saturday.  He’s a lot like Wigginton in many ways with good size and athleticism for the wing accompanied by a solid skill set.  He handled capably, made enough jumpers to keep the defense honest, and finished everything around the rim.

Akosa Maduegbunam, Charlestown HS (MA) –He’s obviously been putting in long hours on his game because he’s not the same player he was twelve months ago.  Another swingman with a strong and athletic body, Maduegbunam pulled down rebounds and led the break successfully on a number of occasions, showed a lot of spring, and elevated over the defense for his jumper whenever he wanted.

Kevin Trotman, Taft School (CT) – Similar to Maduegbunam, Trotman’s game seems to have improved by leaps and bounds since we last saw him in the spring.  He’s a legitimate wing player now instead of a big man trying to handle too much.  He used his dribble to get to the rim and found ways to score around the basket utilizing a strong body as well as some crafty finishes.

Kamali Bey, Sabis Charter School (MA) – No freshman did more damage in the MIAA last season than Bey, but what impressed us most about Bey on Saturday were some new additions to his offensive repertoire.  He showed himself capable of facilitating offense for others by handling and passing the ball in the open floor and also showed off an improved touch on his jumper, both behind the arc and pulling up off the dribble.

Egi Gjikondi, Cushing Academy (MA) – Gjikondi impacted the game in a variety of different ways on both ends of the floor.  He showed an improved ability to anchor the game defensively with his shot blocking and rebounding while offensively he continued to be at his best scoring on the move around the rim, while also demonstrating shooting range out to 16-18 feet.

Andrew Chrabascz, Portsmouth HS (RI) – There isn’t a more well schooled post player anywhere in 2012…period.  The kid should make an instructional video about footwork because he’s got every pivot, move, and counter move that we’ve ever heard of.  And although he’s grown to 6’6” the “post player” label is no longer an all encompassing one as he has expanded his perimeter skill set.

Georges Niang, Tilton School (NH) – Another inside-out big man whose frame has stretched out, Niang now stands six-feet-seven-inches off the ground.  Most of his buckets were around the rim on Saturday, which allowed him to show off his tremendously soft hands and good ambiguity, but we also know from experience that he can step out and make shots from the perimeter with ease.

Chris Braley, Nokomis HS (ME) – His game has really gone to new levels in the last six months.  Always the shot maker, Braley has become much more adept at freeing himself and getting the shot off while closely contested.  But he’s far from a one trick pony as his enhanced body is allowing him to rebound and finish some inside while also being able to handle and pass from the perimeter.

Tarik Smith, St. Paul’s (NH) – The super smooth playmaking guard can do just about anything with the ball in his hands.  He has an effortless stroke from behind the three-point line, the handle to create, and the instincts to make the correct decision on the move.  He put up big numbers for St. Paul’s last year but will surprise no one this year as he’ll be one of the best guards in the league as a soph.