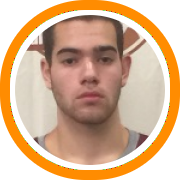 Here’s a look at some of the top performances we saw from the big men:

Opong Bramble, Brunswick 2016 – He’s powerful and athletic, able to rise above the rim to finish or grab rebounds and also able to make some plays off the bounce. Bramble relished the opportunity to play a marquee role and drew more and more college coaches as the day went on.

Kyle Doucette, Williston Northampton 2016 – There are few big men in New England who have improved more in the last year than Doucette and he continued to prove it here, just as he has throughout the spring. He was powerful inside, using both hands around the rim and being efficient with every touch.

James Wells, Worcester Academy 2016- Wells was extremely active on both ends of the floor, altering and blocking shots and crashing the offensive boards hard. He has developed a nice touch on his jumper and his court vision continues to develop, enabling him to make nice passes out of double teams.

Joe Saba, St. Bernard’s Central Catholic High School 2016 – The big man can finish over either shoulder and has a nice touch from midrange. Saba made a difference on the defensive end too, blocking and altering shots, and really stood out during the one-on-one portion of the day.

Josh Bradanese, Billerica Memorial High School 2016 – He was a major mismatch problem throughout the day. He has a strong frame, good footwork and a soft touch around the rim, but he’s equally capable of stepping to the perimeter where he can shoot the 3 or utilize a deceptively quick first step.

Jared Whitt, Worcester Academy 2018 – It’s refreshing to see a big man who is committed to the paint, especially at a young age, and it was during the competitive breakdown drills that Whitt proved his prowess playing on the low post, showing both good footwork and an ability to turn his left shoulder.

Rayshon Ward, Plymouth North 2018 – A long and cut athlete who utilized his mobility and length in order to make rangy plays on both ends of the floor, Ward can cover the court, make straight line drives and defend multiple positions.

Matt Folger, Williston Northampton 2016 – The Weston (CT) graduate was one of the most impressive performers in the competitive breakdown portion of the day, and someone we’ll profile later in the week, but for now suffice it to say that Folger was impressive and bound to generate more recruitment as the summer goes on.

Isaiah Fontaine, Brimmer & May 2016 – He’s made clear strides within his game this year, and even in the last few months, and so it was no surprise to see him get better as the day went along here. There were flashes of his undeniable potential, thanks to his length and athleticism, and a clear upside left to discover.