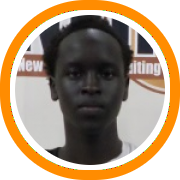 Perhaps the best overall wing at the New England Elite 75 Showcase – Frosh/Soph Edition wasn’t from New England at all. Che Evans, a 6-foot-6 swingman from Dulaney High School in Maryland made the trip to New England and lefty having made quite an impression. Evans is long, athletic and powerful. He was a man among boys attacking the rim and still bursting with potential. He handled it well, finishes around the rim and was “the total package” according to one coach.

Speaking of being a man among boys, Redemption Christian’s Jerry Iliya was physically dominant throughout the night as well. Standing 6-foot-4 with a 6-foot-11 wingspan, Ilya sported length and athleticism for the highest levels. His motor was equally impressive as he attacked the rim and glass alike. He also showed a good willingness to play around the basket despite the fact that he projects on the wing in the long run.

Another physically gifted wing, Malachi Hazeton was a “freak athlete” according to one coach as he rattled the rim for a series of explosive dunks throughout the night. More importantly though, was the progression we saw of both his skill set and his approach. He played hard and competed from start to finish, holding himself to a high standard, and even knocked down a couple of shots from long range.

Judson Martindale is just one of several highly talented youngsters at Worcester Academy. While he’s just a freshman for the Hilltoppers, he already has a reputation coming into the NEPSAC. He might have been best known as a shooter early on but he’s evolved quite a bit athletically is now able to rise up high above the rim. Combine that with his prowess in full court pressure defenses and ability to rebound from the wing and his impact is a versatile one.

Sage Ballard is a name we got to know in the middle school ranks as he previously starred at the Junior Elite 75. He continued to show out in the Frosh/Soph session. His skill set, instincts and floor game is all mature beyond his years at this point but he’s also got the size, length and budding athleticism so that he’s nowhere near a finished product. He’s an exciting prospect as he already has a level of polish to his game and yet the chance to keep getting better.

Here’s a look at the other freshmen wings that impressed:

Sheer Akot, Hillside School – In terms of long-term potential there weren’t many guys more intriguing than Akot. He has good size at 6-foot-5, correlating length and is still just beginning to grow into his body. He’s fluid on the floor and also possesses a high skill level for his age and size. In short, he has all the tools to have a very bright future with hard work.

Terrence Clarke, Rectory – A long and athletic wing with loads of still untapped potential, Clarke isn’t just a physically gifted prospect but he also has a tight handle at a young age. His stroke is sound and with just a little more loft could develop into a weapon. Initially a member of the 2020 class, Clarke reportedly reclassified to 2021 at the Rectory School.

Jaylen Smith, Rectory – An already bigger guard who can play either wing position, Smith did his best work shooting off the dribble on Friday night. He has a tendency to swing for the fences when in attack mode and once he lets the game come to him and learns to let his jumper set up his penetration he’ll be highly effective.

Garrett Kirk, Northfield Mount Hermon – He made a strong impression with his motor and hard-nosed style of play. He competed on both ends of the floor, has an already strong frame, was a consistent scoring threat in the mid-range area and seemed to be a high IQ player.

Craig Faria, Cardinal Spellman – He is probably stronger than he is explosive right now but what really stands out is his natural instinct and feel for the game. He has a lot of touch and crafty scoring tools from anywhere inside of 15 feet and is just very smooth with the ball in his hands.

Dylan Ahearn, Marshfield – The younger brother of Binghamton forward Bobby Ahearn, Dylan is more of a guard than his big brother but has some of the same skill package. He shoots it well from the arc and has a particularly effective repertoire of runners in the lane.

Jack Richard, Nashoba – Richard made his mark Saturday night shooting the lights out. Already standing at 6-foot-2, he made a definite impression in this setting and could be a big time addition for the Chieftains at the varsity level this year.

Nathan Letendre, Palmer – He’ll play along the frontline at Palmer, but he showed plenty of face-up skill to make the transition to the wing on a full time basis and also has plenty of future upside still left to discover.

James Cahill, Belmont Hill – A very intriguing young prospect who is probably best described as a wing right now but showed some true guard type skills with his ball-handling and ability to create and so has a chance to blossom into a big guard down the road.

Sean Culhane, Burlington – Culhane is a versatile player who has the big body necessary to play inside yet the skill set to produce on the perimeter. He showed a quick release and fluid stroke out to the three-point line and is a multi-positional type of player.

Dante Law, Taunton – He was a workhorse from start to finish and so he stood out not by waiting his chance to try to make a play but by defending, passing and doing the type of “little things” that may be more subtle but are no less valuable on the basketball court.