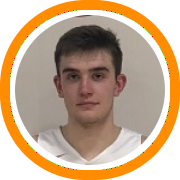 The class of 2019 made their introduction last weekend at the Elite 75 – Frosh/Soph. Here’s a look at the freshmen frontcourt players that stood out right away:

Maxwell Lorca-Lloyd – This guy is absolutely loaded with talent. He’s 6-foot-9 with long arms but covers the court and moves with the smoothness of a guard. He’s got good touch inside the paint and can put it down once or twice but is just starting to realize how talented he is. (6’9, C/F, NMH)

Josh Moncrieffe – His size and strength are assets inside but long-term he projects on the wing where his quickness and playmaking abilities are already evident and he has the potential to evolve into a lockdown defender as well. (Master’s)

Chris Camille – A run and jump athlete with long arms, good instincts and a ton of clear potential. When it comes to long-term prospects, there were few more intriguing than this guy, who figures to be one of the best freshmen in the MIAA this season.

Vondre Chase – He’s an intriguing youngster because he obviously has a lot of untapped upside with his range, length and athleticism, yet he’s already extremely mature for his age. He was intelligent on and off the floor, had a mature approach and was a great teammate.

Jay Dieterle – Right now he looks the part of a traditional small forward – skilled, smart & efficient if not as explosive right now as other top players. He has a good skill set, shoots it especially well in the mid-range are and is very adept at changing speeds and creating contact.

John Adams – The Blackstone Valley Tech product is more of a traditional big man with good size, long arms and the prototypical basketball body. His production came in flashes but there were clear moments of upside, especially on the glass where he uses his body and blocks out.

Kyle Murphy – He might not be the quickest guy on the wing, but there are few better at playing angles and body positioning to get to the rim off the dribble. This wing scorer was also a deceptively productive defender with the potential to check multiple positions.

Kyle Layman – The younger brother of Jake and Ryan Layman, Kyle has the same family size on the wing. Right now he’s a great presence around the rim who goes to the glass hard but you can see signs of the same soft touch out to 17 feet. (6’5, F, King Philip)

Dan Schlakman – A skilled big man and potential face-up four in the making, Schlakman can both handle and pass the ball well for his age and size and follows in the footsteps of the likes of Dennis Clifford and Alec Brennan in the Milton Academy program.

DYondre Dominguez – A 6-foot-4 southpaw who arrives on the high school scene with a big reputation from the middle school ranks, Dominguez is long, athletic and active with a half-court game that is gradually said to be expanding beyond the paint.

Jack Gumbert – He was a major mismatch problem who combined good size at his age with an ability to create offense for both himself and his teammates, and even mixed in a couple of jumpers to keep defenders guessing from start to finish.

Will Goss – A smart and unselfish forward, Goss impressed with good footwork in the post, athletic plays and big finishes in drill work and continued progression from his days in the middle school ranks according to the experts at HoopRootz.

Pete Kapanides – An inside-out type forward who showed the ability to be a scoring threat in the post but also step-out and make open shots to the three-point line, Kapanides’ versatility made him a tough cover for opposing defenses.

• T.J. Magliozzi was a hard-working athlete on the wing with a nice mid-range game who might end up a guard before it’s all said and done;
• Jason Mongeon plays bigger than his size around the paint, provides a good passer from the forward spot and ran the floor well;
• Dubbed a “glue guy” by his coach, Wesley Delvar was athletic on the wing and tenacious defensively;
• James Gascoigne is transitioning from a forward to a guard and making nice strides with his slashing game;
• A smooth lefty forward with a versatile style, Angelo Santiago is smooth with elements of finesse and power in his repertoire;
• Jalen Iles-Smith scores over bigger players on the block and provides good toughness inside the paint;
• Nick Karns is an undersized forward that was productive on the glass as well as the defensive end as he played bigger than his size.