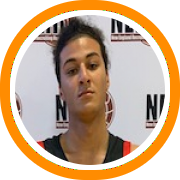 Our first recap will look back at the big men who stood out in the class of 2019. Unfortunately, the list was one short as Dexter School’s Charles Coleman wasn’t yet cleared for contact following his summer injury but was nonetheless on hand and still promises to be one of the top big men to follow in New England’s sophomore class.

Arguably the biggest name coming into the event was that of Northfield Mount Hermon’s Maxwell Lorca-Lloyd. A year ago, Lorca-Lloyd’s dominance was based upon his physical gifts – length, athleticism, mobility and a high motor – and that’s just as evident now as he was blocking shots, changing ends and finishing explosively. But we’ve also seen a noticeable expansion in his skill set since the end of last year. He’s started to put the ball down some in the open court and showed progression with his back to the basket as well as he had good footwork with his drop-step and used both hands around the rim.

If Lorca-Lloyd was the biggest name to come out of last year’s freshman class, then Putnam Science Academy’s Akok Akok has been the biggest name of the fall so far as he’s added new offers with virtually every passing day. He too lived up to the hype on Friday night as he showed off an increasingly consistent perimeter game (knocking down shots all the way out to the arc), a quick first step in his face-up game, equally quick bounce around the rim and even a high level pass or two. Defensively, he altered almost every shot around him and was a rebounding machine despite his current lack of weight.

Once the event tipped off, there wasn’t a bigger stock-riser on hand than Redemption Christian’s Bernard Kouma. Measuring in a 6’9” with a 7’2” wingspan and the single largest standing reach in the field (9’1.5”), Kouma is an absolute mountain of a man. He also possesses the power and athleticism to compliment his length and so he was a major force around the rim on both ends of the floor, blocking and rebounding virtually everything and finishing with unmatched authority. He even mixed in a couple of 12 foot jumpers and some left-handed finishes around the rim.

Here’s a look at the other frontcourt prospects who stood out on Saturday:

Dan Schlakman, Milton Academy – He’s continued to grow and evolve physically, so that he can hold his own inside with the very best of competition. He also has a high basketball I.Q. and maturity about his game. Finally, he might have been the very best outlet passer in the entire field, including one bullet he threw almost three-quarters of the floor baseball style that hit his receiver perfectly in stride.

Mitch Doherty, Worcester Academy – He’s highly skilled with an understanding of the game beyond his years. He had as fluid a three-point release as any frontcourt player in the field and also projects as the type of big man who will be especially valuable at the next level because coaches are going to be able to run offense with him thanks to his intellect, skill and most especially his passing ability.

Brian Bennett, Northfield Mount Hermon – A newcomer to New England, Bennett just began his first year at NMH. The big-bodied lefty has a high basketball I.Q. and a skill set that extends to the arc with ease. He shoots it with range and looks the part of a stretch or pick-and-pop style four-man. As he continues to develop his body and motor, he has all the requisite tools to be successful.

Jayden Dummett, Advanced Math & Science Academy - The AMSA big man made a name for himself with an enticing combination of mobility and size. He owns a really good build and uses that strength, along with his high motor and long arms, to snag every rebound in sight while also starting to develop a handle facing the basket.

Rhett Carter, Milton Academy – Another talented young big man coming up the ranks at Milton Academy, Carter has a similarly high basketball I.Q. along with very good touch around the rim, soft hands and developing skill facing the basket. He rebounded the ball well on both ends and even showed some deceptive mobility at times.

Darion Jordan-Thomas, Proctor Academy – A classic “hybrid four-man,” this repeat sophomore is like a pogo stick around the rim. He is as quick off his feet as he is high above the rim, and when you combine that with his mobility, he is a true defensive stat stuffer with tremendous potential versatility on that end of the floor.

Antal Lee, Toll Gate – Another multi-positional player, Lee has continued to grow into his body and stretch his frame and is that much more versatile as a result. While we know he has a face-up game, he was probably most productive around the paint on Saturday night as he boxed-out consistently on the glass and scored with both hands around the rim.

Jack Shannon, Iona Prep (NY) – A New York native from Iona Prep (NY), Shannon made his trip to New England well worth it as he definitely made a name for himself. A long and still developing big man who is a long way from a finished product physically, Shannon shows clear upside and long-term tools to evolve into a versatile offensive big man.

Michael Rabinovich, Worcester Academy – The most exciting thing about Rabinovich is his rate of development. This summer, he made an impression at the Stars of Tomorrow Camp as a solid frontcourt prospect with good long-term tools. In the three months since he’s already started to turn potential into production. He impacts the game around the rim but also handles the ball very well for his size.

Rakesh Tibby, East Catholic – A talented 6’7” forward with a broad frame, good hands and touch, Tibby definitely has tools to develop. He has quality natural instincts and showed a deceptively quick first step facing the basket. As his motor starts to run in full throttle on a consistent basis his impact will only continue to grow.

Sean Flynn, Holy Cross (NY) – Another New York native who came to New England for exposure, Flynn stood out as a true big man in the making with developing tools. He’s well built with broad shoulders and a strong build, showed some touch out to the mid-range area and did a very nice job of creating space inside the lane and controlling the glass.

Colt Delaney, Calais – An undersized big man right now, but one who can produce against bigger players in the painted area, Delaney is strong and powerful with a low center of gravity that makes him very difficult to move. He played hard, finished inside and got things done. If there ends up being another growth spurt in his future, his game could go to brand new levels.

Connor Robertson, Orono – The Orono forward is versatile and a definite mismatch problem. While he can step out and knock down open shots to the arc, he also has a strong body and legitimate game with his back to the basket which allows him to take smaller or less powerful forwards inside with very consistent results.

Jack Hughes, Uxbridge – Hughes has the size and foundation of skill to play a variety of different frontcourt positions. He doesn’t yet have the height of a true big man but he’s productive inside because he’s strong and tough. He can play with his back to the basket but can also step out and face the basket and so he has the tools to play at the next level with continued work.

Chibuikem Onwuogo, Peabody - With good size and physical tools, Onwuogo should have no problem making a big impact in the coming high school season. Right now he looks the part of a power forward type but there are tools in place that could eventually extend his game to the perimeter.