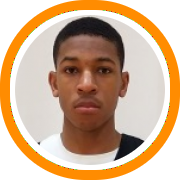 Playing your way into the NERR database is no easy task. It means that you’ve not only been seen by the NERR staff, but also evaluated to be a DEFINITE prospect for the college level. 25 players in the class of 2018 managed to earn that distinction at last weekend’s Elite 75 Frosh/Soph. Here’s a look at the list:

Akok Akok – Reportedly the nephew of former NBA player Manut Bol, Akok made quite an impression on Saturday night. He was one of the elite rim protectors in the field and threw down a massive dunk on top of a helpless defender at one point.

Joel Bailey – A 6-foot-2 point guard from Redemption Christian in Northfield, Bailey was one of the biggest breakouts of the event. A true floor general with a terrific feel for the game and innate passing ability, he’s going to be one to watch down the road.

Jimmy Yfantopulos – It was a coming out party for a very good point court who might not have been spectacular, but was solid across the board on the offensive end as he used both hands, showed good court awareness and played and unselfish style.

Mykel Derring – A high level athlete from Brighton (MA), Derring is strong, bouncy and able to make plays above the rim. He’s working to develop his skill set but already has a good feel for spacing and made a number of hard cuts away from the ball.

Doug Alves – A skilled southpaw who handles the ball well, can shoot it and even showed the step-back game to create space. His potential will only increase as he continues to grow and fill out his frame.

Terion Moss – An undersized, spark-plus style point guard who combine speed and quickness alike, Moss pushes the tempo at every opportunity and puts immediate pressure on opposing defenses. He was also pretty crafty inside the lane with floaters and dishes. (5’9, PG, Portland HS (ME)

Travis Evee – The wiry southpaw guard from Boston College High School had some big games last year as a freshman and continued to show that jitter-bug style game that allows him to make plays in traffic, navigate tight spaces and get right into the teeth of the defense.

Jordan Mason – A big guard/wing who makes a living behind the three-point line. Mason can make open threes in bunches and went for a stretch where he didn’t seem to miss on Saturday. His size also allows him to get his shot off without much separation.

Jaekwon Spencer – One of the best all-around athletes in the field, Spencer was able to get up and plaly above the rim like few others in the field. While his explosiveness is his calling card, he also has good size at 6-foot-5.

Liam Regan – A 6-foot-4 forward who is still young for his grade and just starting to develop, Regard already has a good body and the high motor to maximize his tools. He was most productive inside the lane with finishes and rebounds alike.

Gob Gabriel – He comes from good stock and has the same high motor that the family has become known for. Gabriel plays hard, has a developing handle and covers the court effortlessly with long and fluid strides.

Mohamed Traore – A quick point guard with great vision and passing ability, Traore has the rare ability to make those around him better and he seized the moment to prove it this weeked, proving his passing prowess without a shadow of a doubt.

Chris Childs – The latest floor general to come through the Wilbraham & Monson program, Childs impressed with his ball-handling, ability to attack the rim as well as his commitment to the defensive end of the floor, as he produced on both ends all night.

Darion Jordan-Thomas – He’s the quintessential prospect in that he has a plethora of tools and is only just scratching the surface of his ability. His staggering length is the first thing that jumps out at young, and begs the question whether he might still be growing. Either way, he’s one to watch. (6’4, C/F, New Mission)

Jerrod Clark – Another Brighton product who showed well in the 2018 class, Clark has good strength inside the paint but is also a skilled finisher with good interior touch that allowed him to be very productive in this setting.

Devrae Burns – You can’t judge the size of the heart by his height in inches. Burns may be undersized but he’s fearless, he gets after it on the defensive end and he can make shots in bunches once he gets going.

Tyler Spencer – A swingman with increasing size and a versatile floor game, Burns makes open shots but is also a good passer and heady player at the small forward position who already saw consistent minutes at the high school level as a freshman.

Ismael Valdez – A long and athletic interior presence with some definite scholarship potential, Valdez is another talented big man from the Redemption Christian program. He has long arms, wide shoulders and a solid build.

Matt Relihan – A skilled and confident guard who stood out especially with his ability to stroke open shots from behind the three-point line, Relihan has obviously been well trained with the ball in his hands.

Connor Gibson – A long and active interior presence, Gibson is still just growing into his body but he already has plenty of tools inside the paint. His post play looked mature for his age as he scored some with his back to the basket while also being able to face-up and make a shot.

Juan Hernandez – An athletic slashing type of guard who thrives on the wing, Hernandez has a strong court presence and the ability to not just get all the way to the rim but also make tough pull-ups off the dribble.

Mariano Rodriguez – A super athletic lefty who attacks the rim with speed and quickness alike but also has shooting range out to the three-point line, Rodriguez is a talented offensive player with the physical tools to impact the game on both ends.

Colin Bradanese – A jack-of-all trades type of forward, Bradanese has the versatility to mesh with a variety of different line-ups. His offensive game extends both inside and out, but in this setting his most notable contributions were on the glass.

Luca Mirabello – Just what you would expect from a coach’s son, Mirabello had the look of a true point guard, heady and dependable with the ball in his hands, but also a disciplined on-the-ball defender in his own rite.

Tyler Burton – With a nice blend of athleticism, basketball I.Q. and sheer strength, Burton showed a balanced fundamental game and versatile toolset in the backcourt that should, one day, translate nicely to the next level.

Gio Ciampa – A versatile scoring threat on the perimeter who was both able to make some strong finishes at the rim as well as knock down open shots from the perimeter, Ciampa even earned praise on the defensive end as well.

Luis Mora – A fundamentally sound guard who is in his first year stateside after playing on the Venezulian junior national team, Mora’s best asset is probably his ability to shoot the ball but he also has a dependable handle.