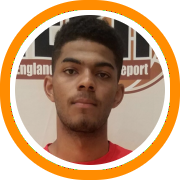 Waiting until the 11th hour in the recruiting world can be risky business but sometimes it works out just the way you intended. That has certainly been the case for a select few local products who have all made recent commitments to various D2 schools.

Bentley University landed their second local commitment of the week when Hotchkiss School post-graduate Adria Amabilino Perez committed to the Falcons. Perez is a 6-foot-8 forward from England who arrived in the United States this past September but flew under the radar after a groin injury prevented him from participating in fall workouts. He returned to the court in time for the start of the season and continued to assert himself as the year went on before playing with NE6 in the Under Armour Association this spring. A well-built and versatile forward who handles the ball well, has a high acumen for the game, and a developing skill set, Perez' best basketball is clearly still in front of him as he taps into his vast potential.

MacDuffie School's John Bella-Hunter announced his commitment to Tusculum College on Thursday after accepting a full athletic scholarship. Tusculum is an NCAA Division II university in Tennessee that competes in the South Atlantic Conference. Bella-Hunter is a local western Massachusetts product who ran with the Boston Warriors last year. The southpaw carved out a consistent role in a deep MacDuffie frontcourt rotation in recent years while simultaneously working to extend his shooting range and expand his game. At six-foot-eight, he has enough size to play either the four or the five at the next level. Most importantly, Bella-Hunter is a hard-worker and outstanding teammate who doesn't need to put up big individual numbers to impact winning and culture.

Hermon High School and Black Bear North's Jacob Godfrey accepted a full athletic scholarship to East Stroudsburg University in Pennsylvania earlier this month. Godfrey helped Hermon win the Maine Class B state championship this winter after leading Machias to a Class D state championship as a junior. He averaged 12 points and 8 rebounds per game this year and was a semifinalist for the Maine Mr. Basketball award. He's a true diamond in the rough though who has a world of untapped potential with a good basketball body, developing skills, and versatility. East Stroudsburg went to the Elite 8 of the NCAA D2 tournament last year and has been to 5 NCAA tournaments in the last 9 years.