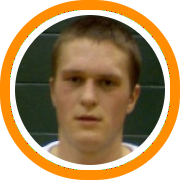 Babson Gets a Good One

When it said ‘Committed to Babson’ next to Russell Braithwaite’s name in the event program for the National Prep Showcase, many coaches believed it was a mistake.  Fortunately for Beavers it isn’t a mistake at all, just a tremendous get for head coach Stephan Brennan.  Braithwaite is a physical guard who should be able to come right in and make an immediate impact with his ability to get to the rim and lock up on the defensive end.  He has been considered by most to be a scholarship level prospect for several years but ultimately made a good decision to go to a school where he can get a terrific education and make a big impact on the basketball floor.

Three players in Suffield Academy’s class of 2009 recently went early decision to Amherst.  On Monday they heard back from the admissions office and all received good news.  6’9” center Roshard Bryant, 6’6” forward Pierce Edwards, and 6’4” swingman Matt Edwards will join the Lord Jeffs program next season and have the potential to be the frontline of the future for head coach Dave Hixon.  Bryant returns to Suffield Academy this year as a much better player than he was a year ago.  He’s filled out quite a bit physically and developed an improved feel for the game and has always been long, athletic, and a major defensive presence.  The Edwards brothers are post-graduates from Texas who were both nominated for the McDonald’s All-American game last year.  They are both skilled and hard working players who will help to make Suffield one of the better teams in class B this year.

Another player who got some good news this week was Choate Rosemary Hall post-graduate Tom Piscina who received his acceptance letter from Columbia University.  Piscinia, who graduated from the Brunswick School last spring, is a highly intelligent and crafty combo-guard who makes excellent decisions with the ball in his hands.  He has also developed a reputation as a big shot maker as his play down the stretch of games is a big reason why Choate is off to a 3-0 start this season.  Piscinia is set to join the Lions basketball program as soon as he arrives on campus next fall.

New Hampshire sharp-shooter, Mike Stys, who is currently doing a post-graduate year at Proctor Academy, recently accepted a scholarship offer to the University of New Haven.  Stys had interest from a variety of division II programs, but ultimately there were some family ties that played a part in his decision.  His older brother Ryan previously played at the University of Hartford, where current New Haven head coach Al Siebert was formerly the associate head coach.  Mike has done a tremendous job making himself into a scholarship level player as his conditioning is much improved from his senior season.  He should be a big time shot maker for the Chargers for the next four years.