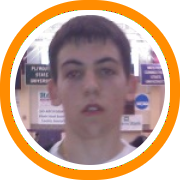 The state’s number one ranked team had to work for their win against Watertown, but ultimately their size up front proved to be the difference.  Carson Desrosiers led the way with 29 points on 12 of 14 shooting from the floor.  He also added 14 rebounds and 6 blocks (although it certainly seemed like more in person as he appeared to block or alter every Watertown shot that came inside the paint).  But give Watertown plenty of credit as they kept the game close despite not having a single post player on their roster.  The Red Raiders may just be the best shooting team we’ve seen this year in high school basketball as all five players on the floor can bomb away from behind the three-point line.  The Stockmal twins were on fire in the second quarter as Cory hit four first half three-pointers, and Kyle three, to give them a 40-38 lead going into halftime.  But ultimately, Central Catholic’s size up front and the play of Desrosiers helped them to seal a 77-72 decision.

Newton North earned a victory in the consolation game to start the day as they held off a surging BC High team down the stretch.  The final seconds of the contest were about as exciting as it gets.  BC’s sophomore point guard Bryan Hurley hit a three-point with two seconds left to cut Newton North’s lead to 83-82.  Then BC head coach Bill Loughnane called a time-out despite the fact that he knew he didn’t have one.  Although the call resulted in a technical foul, it stopped the clock from running out and allowed him to set up his defense.  Greg Kelley went to the line and made 1-2, but Newton North still had to get the ball in from half-court.  After BC deflected the in-bounds pass, the ball found it’s way into Jameel Galloway’s hands who had wound up with an uncontested 40 footer that could have potentially won the game.  Unfortunately for the home crowd, the ball bounced off the side of the rim and gave Newton North the victory.

He did it all tonight.  He continued to dominate the game at the defensive end with his ability to block and alter shots.  But we were especially impressed with how crafty of a shot blocker he is…Desrosiers knows all the tricks that good offensive players use to get their shot off, and he doesn’t fall for them.  Offensively, he showed a tremendous touch as he utilized his long arms to shoot over the defense from the high post and short corner and even knocked down a three-pointer in transition.  You also couldn’t ignore his prowess passing the basketball as he was effective from both the free-throw line area as well as the safety valve spot when breaking Watertown’s pressure.

Billy Marsden, Central Catholic – It’s pretty impressive when you don’t play your best basketball and still end up with 22 points, 7 rebounds, and 6 assists…and that’s what Marsden did in Sunday night’s championship game.  We were most impressed with the way he passed the ball off the dribble as he made a couple of great finds resulting in easy hoops for his teammates.

Cory Stockmal, Watertown – Stockmal showed tremendous guts and toughness by playing all weekend on essentially one leg with a severely sprained left ankle.  Even more impressive was how productive he still was.  He set the tone for his team offensively by knocking down four first half three-pointers and also playing some tremendous perimeter defense.  Unfortunately, the only person who could stop him was the official as he several questionable calls sent him to the bench with foul trouble throughout the game.  Stockmal finished with 23 points.

Kyle Stockmal, Watertown – He missed a couple of threes to start the game, but he kept shooting as all good shooters do, and began to connect in a big way.  He finished with 25 points including a couple of deep threes as well as some nice pull-ups off the dribble.  He also kept his team within striking distance down the stretch as he showed an ability to handle the ball, attract the defense, and kick it out to shooters in the game’s final minute.

Bryan Hurley, Boston College – The sophomore point guard has quite a future in front of him.  He’s got the feel for the game of a senior as he’s a smart player and crafty passer.  He can also stroke the ball from behind the arc and get to the rim with his dribble, as he did a little bit of everything on Sunday afternoon.  Hurley finished with 22 points.

Greg Kelley, Newton North – Kelley showed his total inside out game on Sunday, finishing with 28 points.  He showed a nice repertoire of moves with his back to the basket, but also stepped out to the perimeter and demonstrated his prowess shooting the ball as he connected on five three-pointers.  Dropping a performance like that in BC HS’s gym reminded more than one person in the stands of current Boston University freshman Jake O’Brien.

Geoffery Woodberry, Newton North – Woodberry added 27 points in Newton North’s consolation victory as he was able to consistently get to the rim.  BC simply couldn’t keep him in front, nor could they give him any problems finishing at the rim.  The swingman also demonstrated his physical strength and athleticism by taking his defender to the low post, where he was no less effective playing with his back to the basket.

Mike Albanese, Boston College – The senior shooting guard opened the game on a tear connecting on several three-pointers.  But he’s more than just a catch and shoot specialist as he also got to the rim on occasion and even showed a smooth pull-up off the dribble.  He finished with 22.

Jameel Galloway, Boston College – He’s long, athletic, and active and that helps him to block shots, rebound the ball in high volume, and finish plays around the rim.  He finished with a double-double of ten points and ten rebounds.

Colin Halprin, Boston College – He takes up a lot of space in the paint, is a deceptively good finisher around the rim, and really rebounds in high volume, showing a willingness to pursue the ball out of his area.  He also showed a nice stroke from the mid-range area.

Jimmy Zenevitch, Central Catholic – It’s easy to get overshadowed playing next to Desrosiers, but this sophomore big man has a bright future.  He finished around the rim and showed a soft touch and quick release shooting the ball from 15 feet.

Benyan Kerman, Watertown – He can really pressure the ball defensively and get into the lane with his dribble on the offensive end.  His presence takes some pressure off the twins, but he’ll need to improve his decision making in the state tournament.

Marco Coppola, Watertown – The sophomore sharp-shooter is an extremely valuable fourth starter, because when defenses focus on Kerman and the twins it leaves Coppola open for shots.  He also has a quick trigger that allows him to get it off in a hurry.

Craig Marriro, Newton North – He’s a skilled combo-guard who can both make open shots and create for himself and others off the dribble.  We also loved his poise in penetrate and kick situations as well.

Watertown’s Kyle Stockmal became the school’s all-time leading scorer when he knocked down a pull-up jumper with 37 seconds left in the second quarter.  Although the horn sounded to acknowledge his achievement, the senior captain was much more interested in getting back to the game as his bucket had just given his team a 40-38 advantage.