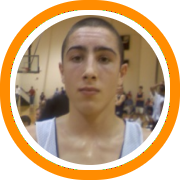 The New England Recruiting Report was at Westfield State University on Saturday for day one of the Hall of Fame Columbus Day Challenge.

One of the most notable developments of the day was the debut of seven-foot-one center Enosch Wolf who will star at Wilbraham & Monson this season before heading to the University of Connecticut next season.  The skilled southpaw impressed with his skill set facing the basket, a high motor, and a good feel for the game.

One of the more intriguing games of the day on Saturday featured MB Nation against New England Storm.  The Storm got out in transition, shared the ball beautifully, and caught fire from behind the arc in the first half to build up a 20 point lead, but the Nation fought their way all the way back in the second behind Alex Furness’ playmaking and a couple of deep threes from Chris Braley.  Matt Ellis and Harry Rafferty were both on fire from long range, making numerous big shots throughout the game, but it was Thomas Palleschi and Will Defanti who took over for their respective teams down the stretch.  While Palleschi outmatched smaller defenders with his back to the basket, it was Defanti who claimed victory for his squad, overpowering his defender to score consecutive buckets and setting up his teammate for an easy lay-up.

Here is a look at some of the players who impressed:

Kaleb Joseph, Expressions Elite – The second year guard made some big time plays with the ball in his hands.  Early in his first game he crossed over his defender with a quick left to right move, spun away from the help-side defender, and then double clutched to avoid the third.  Later in the day, he showed the range on his jumper, elevated for mid-range jumpers, and continued to slice through the lane.

Musa Elsir, Basketbull – The senior from West Springfield High School showed an added dimension to his game with a silky smooth jumper.  The six-foot-three swingmen made several long range jumpers during the course of his team’s game against the Storm and then went to work in the mid-range area, making shots both off the dribble and the catch.

Jake Donnelly, Lone Wolf – Typically known for his ability to do a little bit of everything, Donnelly did a lot of a few things against Worcester West, leading his team to victory by scoring 27 points and handing out numerous assists.  He shots the ball with deep range, was aggressive with his dribble, all the while seeing the floor and making good decisions.

Robinson Vilmont, New England Ballas – A point guard who continues to fly under the radar despite a long history of success on the court, Vilmont continued to show his versatile playmaking game on Saturday.  Equally effective off with his jumper or his drive, the Everett product forced his defender to pick his poison and then responded accordingly.

Mike Odenwaelder, Connecticut Gold – A six-foot-six forward from Wamogo High School, Odenwaelder showed a nice combination of size and skill.  He consistently made shots in the mid-range area, occasionally stretched that range out to the three-point line, and made one particularly impressive one dribble drive to attack a close-out from the perimeter.

Colin Richey, Blackstone Valley Chaos – It was far from Chaos for Blackstone Valley as Richey ran the show to near perfection, continuing what has been a very impressive fall for the sophomore point guard.  Richey played with good balance, attacking with intelligence but still distributing effectively for his teammates.

Shawn Strickland & DeWayne Wynn, WBC – Strickland and Wynn formed a nice one-two combo for WBC.  Strickland was productive attacking the basket, both in the open floor as well as transition, while Wynn showed good athleticism to go along with a versatile scoring game, attacking well in his own right but also showing a solid stroke from the perimeter.

Henry Bolton, Rhode Island Hawks – Another new name that emerged this weekend, Bolton is almost brand new to the game and a potential star in the making for Portsmouth High School.  His first step was as quick as it was long and his jumper consistent enough so that defenders had to respect it.