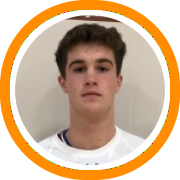 The NERR Coaches vs. Cancer Classic featured four games at Babson College on Friday night as an appetizer for the Scholar Roundball Classic, which remains fully on schedule for Saturday and Sunday.

Proceeds from the evening's game went to benefit the American Cancer Society.

The teams went back and forth for the better part of the first half until the defending Class B champions were able to pull away in the second. The frontcourt duo of Keigan Kerby and Justin Connolly led the way for Brooks. Kerby showed he was fully recovered from last spring’s injury for numerous above-the-rim finishes while Connolly controlled the paint by turning both shoulders and showing his dexterity in the post. Holderness showed off some nice young talent with Karl Jeannot and Carter Storey in the sophomore class along with freshman guard Muhamed Kante.

Coach McVeigh got big efforts out of Keigan Kerby (@keigankerby), Preston Santos & Brian Wright-Kinsey en route to a 53-31 win for @BrooksBasketbal over Holderness at the 2017 @ZeroGravityBB Scholar Roundball Classic... pic.twitter.com/DAxyfulzvJ

Williston Northampton jumped all over Gould early and built the lead to nearly 20 points but the boys from Maine wouldn’t go away as they rattled off numerous second half threes to make it a single possession game in the final minutes. Filip Rebraca scored 13 of his team high 17 points in the first half showing the versatility of his skill set. Michael Manley put on a show in the second with a handful of D3 schools getting more and more nervous with every passing bucket. Josh McGettigan chipped in with 11 and also did a nice job showing increased mobility on the defensive end. Gould sophomore Jaret Griffith led the three-point barrage for Gould, knocking down three from downtown, while big man Wildens Leveque scored 12 points showing a new jump hook and increased cut to his frame.

Ben Farmer's @WillistonHoops squad came out on a mission at the 2017 @ZeroGravityBB Scholar Roundball Classic. Led by Duncan LeXander, Josh McGettigan (@jmcgettigan26) & the BALLSY LEADERSHIP of PG Michael Manley, they walked out w/ a 67-60 win over Gould.... pic.twitter.com/9GfCcwUSct

The Titans opened the game on a 10-0 run but IMG made a valiant effort to fight back throughout the second half. Idan Tretout scored a game high 23 points and put his increased skill set on display while making shots and plays alike on the perimeter. Liam Murphy and John Adams made a formidable one-two punch up front as they combined to scored 23 points with both players in double figures. Raymundo Pastor was the standout for IMG as he finished with a team high 19 points and looked every bit the scholarship level prospect in the process.

The game of the day was played in front of a terrific crowd and ultimately Rivers fed off the energy level of their enthusiastic student section to come away with the hard fought victory. The freshmen tandem of Terrence Clarke and Cameron Tongue was tremendous, scoring 27 and 22 points respectively, to lead them to the win. Kyle Butler provided a spark behind the arc with three threes while Jay Dieterle chipped in with 11 of his own. Dallion Johnson had a tough shooting night but still showed an advanced skill set for Andover while fellow sophomore Matteo Whelton showed off his lethal southpaw stroke. Unsigned 2018 guard Derrick Herrick was the biggest standout for Andover though as he made tough shots and showed sneaky bounce in the open floor.