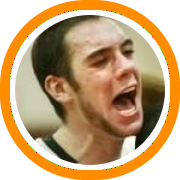 On Wednesday night, the Boston Warriors hosted their annual College Night at the immaculate Kennedy Middle School Fieldhouse in Waltham, Mass.  In front of a group of more than a dozen coaches, here's a look at who stood out...

Liam Bruno - Newton North HS - Versatile wing player who also has the ability to step into the back-court to handle and distribute the basketball.  Attacks with dribble-drive and uses his broad frame to create space to finish around the basket.  Does a nice job of crashing down from the wing to rebound.

Jack Boucher - Newton North HS - High-IQ combo guard who takes good care of the rock and is a knock-down three-point shooter.  Also the incumbent Newton North Quarterback, Boucher is a hard-nosed competitor who will take it to the rack full-speed ahead when the opportunity is there.

John Mastascusa - Malden Catholic HS - Although he stands right around 6'4, Mastascusa plays a lot bigger with his long arms and ability to elevate in a hurry.  Used a nice motor throughout the evening, contending for rebounds with no discrimination and contesting every shot in his neighborhood.

Max Risch - Old Rochester HS - Long run and jump athlete who showed the ability to make plays above the rim.   Looks to get out and run in pursuit of opportunities to attack the rim with two hands in transition.  Lots of room left to improve as he has a chance to develop his perimeter skills and take his game out to the perimeter.  He'll do a post-grad year at Williston come the fall.

Chris Murray - Littleton HS - Sturdy guard who shoots the three ball well and attacks aggressively with dribble to get to the bucket.  Handles and attacks with either hand, loves the pull-up trey-ball in transition.  Does a nice job of communicating and leading his club out on the floor.

Kevin Dipeitrantonio - Watertown HS - Versatile guard who displayed the ability to handle the ball  and run a ball-club while also showing a knack for playing a complimentary  back-court role.  In addition to the offensive package he brings to the table, KD's instincts and quick feet make him an effective back-court defender.

Nick Tarantino - BB&N - Probably the nicest surprise of the night, Tarantino introduced himself as a Class of 2014 big-man prospect who uses a quick release and soft touch down-low to efficiently score the rock.  Really has a nice feel in the paint.

Theo Orbitharbor - Brighton HS - Point guard with a nice handle who can really scoot with the basketball in his hands.  Used the bounce to go by defenders at will throughout the night, consistently getting into the lane to create offense.

Alex Sugarman - Concord-Carlisle HS - Wide-body big man with a nice set of hands; showed a soft-touch around the basket and the ability to face up and shoot the rock from out towards the three-point-arc.  Reads the ball well off the rim to get himself into position to contend for rebounds.

Sam Casey - Lincoln-Sudbury HS - A long-range sniper who spreads the floor, Casey can also slide over to handle the basketball and get his team into an offensive set.  Smart player who moves well without the ball and makes good decisions with the orange in his hands.  Finishes well in transition.

Marcus Richardson - Watertown HS - A hard-charging back-court athlete with a strong physique; attacks the basket off hard angles from the wing and has the ability to finish at the rim.  After a grammar school career in which he was a dominant inside-force, Richardson is a prospect who will be interesting to watch as his guard skills develop.