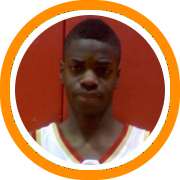 Although both teams started off playing at a slow tempo game, things began to pick up once Albany City Rock's guard Darien White came out with four early three-pointers to give his team a 16-13 lead. With the Rocks playing solid defense, constantly forcing turnovers on the perimeter and 6’6” Javon Ogonyemi blocking or altering every shot that came his way inside the paint, BABC began to settle for outside shots which rarely found the bottom of the net early on. However, Wayne Selden began to get in his groove right before the half ended. He was scoring in many different ways including from the outside, on numerous steals, and had a few put-back lay-ups to help BABC take a 36-32 halftime lead.

The Rocks cooled down to start the second, not hitting shots from the outside nearly as consistently as they did in the first. Jake Fay came off of the bench with great energy to spark BABC, hitting shots from all over the floor and playing solid defense, as both teams battled back and forth in the opening minutes of the second half.

With eight minutes left in the game, Goodluck Okonoboh had a monstrous dunk which turned the momentum around.  However, the run wouldn’t last as Okonoboh would return to the bench, allowing the Rocks to score some easy baskets in transition.  Ultimately though, the City Rocks had no answer for Selden, who helped close out the game with his continued offensive onslaught.

From the second that this game started off, it was hard to see BABC losing as they jumped out to an instant 6-0 lead.  At one point it looked like the Rocks were going to come back after they went on a 10-3 run, but BABC countered by slowing down the tempo and running numerous plays. Once they started to run a half-court trap, Shaquille Jones began to take over the game. Jones got numerous steals and helped BABC pick up momentum. This great energy turned the game around completely and the Rocks could not get back in it.

Similar to the U-15 team, BABC wasn't able to send their big man (Nerlens Noel) to the bench without the Rocks having a much easier time scoring.  Noel was particularly impressive throughout the game, demonstrating a killer instinct by constantly attacking the boards and blocking shots that were not even near him.  He continued to bring intensity in the second half, dunking on many possessions despite his team's 20 point lead.

Georges Niang had a quiet but effective game, showing a great feel for the high post and being comfortable virtually every where on the court.

The Warriors opened the game intent to attack the basket.  Dan Brooks was doing what he does best by using his strong body to get to the rim and finish against contact.  Ousmane Drame was also playing well for the Warriors, controlling the defensive glass and showing off his outside shot.

The tables turned quickly after the Jayhawks began to execute their half-court sets.  They kept feeding John Whickey down low, who seemed to be able to score at will in the low post, going right at Drame. The aggressive play by Whickey encouraged his teammates to do the same. The Jayhawks took numerous momentum shifting charges, frustrating the Warriors into forced turnovers.  As the second half continued on the Jayhawks began to play their up-tempo game, where they were virtually unstoppable.

Steve Spirou’s incredible lay-up with 14 minutes to go was a huge play as it looked like the Jayhawks were pulling away.  Despite a late game run by Brooks, who began hitting outside shots, the Jayhawks closed out the game because of their great execution down the stretch.

Harry Rafferty, MB Nation - After connecting on seven three-pointers in Saturday's game, Rafferty picked up right where he left off on Sunday morning, showing a super smooth stroke from behind the arc and doing his best to keep The Nation in the game against the loaded BABC squad.

Jaylen Brantley, BABC - For every three-pointer that MB Nation hit, Brantley seemed to hit two of his own.  He finished with seven threes in the game as they appeared to be virtual lay-ups once he was able to get his feet set.

Jake Layman, BABC - Layman stood out in BABC's opening win of the day as they pounded Connecticut Select.  The King Phillip forward has come a long way in the last year and was getting his head on the rim to finish plays in transition with a great combination of bounce and length.