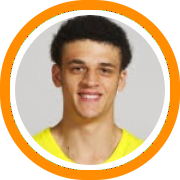 As seasons wind down and February begins to give way to March, the recruiting trail is beginning to heat up again as college coaches are coming back out in full force looking to plug some 11th hour holes in their recruiting classes.

Fortunately for them, there is still plenty of available talent in New England’s 2017 class. In the coming days, we’ll be running through some of those scholarship caliber players who remain uncommitted.

The big men are up first, and ironically three of the very best can all be found at the same school – Putnam Science Academy.

Malik Ondigo, a post-graduate from Arizona, has the most attention right now, but that certainly wasn’t always the case. The 6-foot-10 big man struggled to even crack the line-up early in the season, but has made great strides in recent months and seen his recruitment tick up in the process. DePaul, Minnesota, Pittsburgh, and Boston College are just a few of his recent suitors, along with his hometown Grand Canyon University.

Alexis Yetna has been an absolute double-double machine for PSA, showing why he may be the best rebounder left on the board. DePaul and Iowa State are among his most aggressive suitors, while the list may very well get bigger before it gets any smaller. Isaac Kante has been arguably the most consistent member of the trio from start to finish this season. He pulled in a Kansas State offer early, also claimed a recent DePaul offer, and has a host of mid-major suitors as well.

Beyond, the “big three” of PSA, there’s still plenty of post options left on the board. Here’s a look at just a few:

Khalea Turner-Morris, New Hampton – With a naturally big frame and a clear commitment to his conditioning during his post-graduate year, Turner-Morris has a college ready body. There is natural talent to match his physical tools and that’s a big reason why he captured an offer from St. Bonaventure earlier this fall and has continued to reel in new interest throughout the course of the season.

Dimon Carrigan, Cambridge – Carrigan could be the true diamond in the rough. He’s on a Cambridge team that is slicing through the MIAA like a knife through warm butter. While his primary job on that team has always been to protect the rim, his numbers have really blossomed in recent weeks. All indications are that he may head to prep school next year, in which case his recruitment might very literally blow up given his rapidly emerging physical gifts and an upside that is still largely untapped.

Miks Antoms, Lee Academy – He pulled in an early offer from the University of Maine and has been a trending name in recent weeks. Antoms provides a true back-to-the-basket presence on the offensive end, a diligent rebounder, and a rugged player inside the paint. Given the lack of those type of guys in today’s college game, it’s no surprise more coaches are continuing to follow his progress as the year goes on.

Moses Poelking, Taft – He was one of the bigger sleepers in New England this fall as Atlantic 10 and high-major coaches alike started to track his scent and converge of the Taft School for pre-season workouts. While he hasn’t always been consistently dominant this season, that isn’t totally unexpected for a player in his first season in the U.S., and given his combination of physical gifts and intangibles, he has plenty to offer at the next level.

Jordan Hardwick, Commonwealth – He’s as naturally bouncy as anyone left available in the class with the long arms to match. His skill set has started to come in the last year as well as he’s begun to knock down mid-range jumpers and step away from the basket offensively. He’s young for his grade and yet to fill out his frame, so his best days should still be ahead.

Stay tuned to NERR tomorrow for a look at the best stretch fours/fives left on the board.