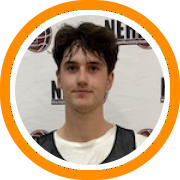 The Be Seen Tour went back to Maine, this time to see the XL Thunder and some of the best prospects in the southern half of the state.

There were nearly 40 players in attendance, all of whom have aspirations to play at the next level.

The night’s action revealed several new prospects who are well on their way to doing just that, while also allowing us to check on the progress of some of the state’s already established big names.

Cash McClure, Maranacook – This guy stuffed all columns of the stat sheet last year as a junior, averaging over 20 points, 7 rebounds, and 6 assists per game. The totality of his floor game was again on full display in this setting. He lived up to his reputation as one of the best shooters in the state but was also extremely reliable with the ball. His handle is efficient, his eyes always up, and his decision-making consistently sound. In short, it was just what you would expect for one of the state’s top guards.

Payton Jones, Thornton Academy – Another one of the state’s top guards, albeit with a much different style. Jones is an attacking playmaker with potentially unmatched explosiveness. This was our second time seeing him this month though, and so we got a better look at some of the more subtle aspects of his arsenal as he showed some footwork around the rim and was even willing to post a smaller guard.

Wyatt Hathaway, Leavitt – Hathaway has been a scoring machine to this point in his high school career, already eclipsing the 1,000 point mark. What stood out in this setting was how savvy and crafty he is. He has all kinds of tough shot-making ability in his arsenal…quick released jumpers, tough ones off his back-foot, and deep threes alike.

Chiwer Mayen, Lewiston – A new addition to the NERR prospect database, Mayen was one of the most pleasant surprises of the night. The 6-foot-8 big man has a good build, long arms, and bouncy athleticism to both finish plays around the rim and block shots on the defensive end.

Casey Cormier, Maranacook – Another very pleasant surprise, Cormier had one of the most advanced skill-sets in the field. He shot it very well, both from three and with his pull-up, showed that he knew how to play, and even rose up for a two-handed dunk at the tail-end of the workout.

Caleb Corey, Wells – Corey was a tough shot-maker with a powerful body but he also stood out with his understanding of how to play. He operated within the flow of the game, moving the ball and screening away frequently, ultimately proving his talent without needing to dominate the ball.

Sam Tarte, Kennebunk – A playmaking guard with a strong lower body, Tartre impressed with some athletic finishes around the rim as well as a couple of high-level passes that he delivered with some flair.

Adam Lux, Kennebunk – A strong body forward with a broad upper body, Lux is a well-rounded athlete who can play through contact off the dribble and has a good pull-up game to match.

Will Harriman, Biddeford – The 6-foot-4 forward could just be scratching the surface with good size, a sturdy frame to fill-out, and some flashes of tough drives to the rim.

John Shea, Edward Little – The 6-foot-6 big man is absolutely immovable inside the paint and a bully over his left shoulder. He can also be a quick finisher and then surprise you with his floor-spacing ability. He shoots a soft ball with great rotation and was virtually automatic at the free-throw line.

Jack Stowell, Falmouth – The southpaw was on fire all night long. He caught our eye by knocking down shots early and kept it up for all three hours. He even made some slippery drives and lay-ins. From start to finish, he was one of the most productive players in the gym.

Owen Maloney, South Portland – The budding big wing was mobile and fundamentally sound with his skill-set. His stroke was capable, but he was best off the bounce with a good first step, the physicality to absorb contact, and lay-up making touch at the rim.

Ian Murray, Kennebunk – He made an impression early on with a sound shooting stroke and continued to be effective throughout the night, including a pair of tough lefty finishes late. He also has solid size on the perimeter and a good frame to fill-out.

Aidan Walcott, Bonny Eagle – At 6-foot-5 he provided a tough match-up because he was pretty good with the ball, consistently able to put it on the floor with a solid first step, and then had an array of different step-through finishes at his disposal.

Nick Langella, Deering – Langella was solid across the board with a balanced floor game. He had a clean stroke, was a fluid ball-handler, and able to make some plays. He also stood out by snapping passes around the perimeter and generally showing that he knew how to play.

JP Estrella, South Portland – Maybe the best long-term prospect in the gym, Estrella already has good size and all the makings of a very versatile four-man. He’s far from a finished product physically and likely still growing but already shows inside-out tools that are bound to only keep emerging.

Evan Reevs, Cape Elizabeth – A 6-foot-8 big man with clear potential, Reevs has a good early combination of size, strength, and potentially versatile skill. He’s a coordinated mover who is able to take opposing bigs off the bounce and probably more comfortable facing the basket right now than he is playing with his back to it.

William Hallen, Fryeburg Academy – Another young big man, Hallen was a game-changer inside. The lefty plays with a ton of sheer force, can bulldoze his way almost anywhere he wants, and clear lots of space. He also showed some deceptive athleticism to get up and finish above the rim given some space to elevate.