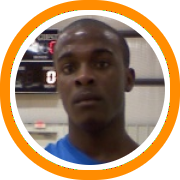 West Roxbury made a critical error in this game by thinking they could apply full court pressure to Soriano.  With his prowess with the ball in his hands he had no problem dismantling the press and getting easy shots for his team.  As for Robinson, he was missing shots in the first half but came back much more efficient in the second to finish with 19 points.  Ultimately, Mount Pleasant held on for a 58-53 decision.

The second game of the day featured Everett against Springfield Central.  It was a close contest for the first three quarters before Everett’s size up front and consequent domination of the boards allowed them to pull away in the fourth.  The senior interior duo of Jerome Cohen (15 points, 7 rebounds) and Kyon Watkins (13 points, 7 rebounds) led the way for Everett.  Cohen in particular impressed college coaches with his ability to attack inside and out, scoring with his back to the basket as well as with his dribble penetration.

But the real story in terms of college prospects in this game was the play of Everett freshman Nerlins Noel.  While he didn’t have the same type of numbers as the upperclassmen, he was by far the highest level prospect on the floor and showed why college coaches will soon be hot on his trail for the next four years.  He moves exceptionally well for a big man, has good basketball instincts, is very active contesting shots and on getting on the glass, and even threw down a dunk literally on top of a challenging defender.

In the day’s third game, Brookline erased a 14 point deficit to open the fourth quarter en route to knocking off Cambridge Rindge & Latin 52-51.  The final game of the day was another closely contested match-up as Stoughton defeated New Bedford 60-59.

Earlier in the weekend Connecticut’s Windsor High School came north to score two impressive wins.  On Friday they used their classic pressure defense to force Everett into 26 turnovers which ultimately fueled Windsor’s 56-53 victory.  Adrian Satchell had 19 points and 8 rebounds for Windsor in the victory.

Saturday Windsor earned another close decision, defeating Springfield Central 64-60 behind a balanced offensive effort.  Tyrus Weaver led the way with 15 while Kingsley Boothe had 12 and Steven Samuels 10 points, 8 assists, and 8 steals.  Jordan Smith had 17 for Central.

Durfee is another school that went 2-0 on the weekend behind the play of their backcourt duo Mike Rivera and Matthew Bodden.  Rivera was the man on Saturday as his 23 points led the way in a 79-59 rout of Brookline.  Saturday was Bodden’s day as he stepped up against his former Cambridge team to score 15 points and come up with a steal and subsequent break away lay-up with 14 seconds left in the game to seal a 64-62 win.

Stoughton’s victory on Sunday was also their second of the weekend as they had knocked off Cathedral 60-43 on Friday behind 17 points from Dartaye Ruffin on 8-9 shooting from the floor.  Edwin Saladin chipped in with 14 while Evan Taylor had 12.

New Bedford finished 1-1 on the weekend defeating Cathedral 69-61 on Saturday before falling to Brookline on Sunday.  Jesse Vicente led the way with 19 points in the win.