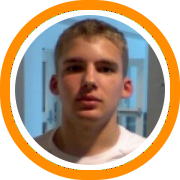 The third day of the BABC Holiday Classic began with two games in the Prep Invitational as Brimmer & May took on St. Mark’s and Lawrence Academy challenged the Winchendon School.

In the first game Brimmer & May did well to stay with a St. Mark’s team that appears to be back to full strength now that Tommy Hubbard has returned to the line-up. Behind Hubbard and New Hampshire bound point guard Sal Abdo St. Mark’s has two battle tested and talented seniors to rely on for leadership. But the team also has some exceptional young talent in 6’8 sophomore power forward Erik Murphy and 6’6 freshman forward Nate Lubick who both have the potential to play at the highest level down the road if they continue to progress.

Murphy, who needs to add a good deal of muscle to his frame, was impressive today with his phenomenal foot work on the block and wide variety of moves in his offensive arsenal. Lubick on the other hand knocked down several open looks from behind the three-point line and also showed good athleticism by finishing well above the rim with some explosion.

The young talent doesn’t stop there either as 6’3 sophomore wing Russell Braithwaite, 6’9 sophomore center Peter Kaasila, and 6’1 sophomore guard Brian Grossman are all scholarship level players. Braithwaite impresses with his tremendous body and solid athleticism, Kaasila with his upper body strength and soft touch close to the hoop, and Grossman with his good ball skills and solid understanding of the game.

If that weren’t enough Brian Burbank and Christian Marghella are two senior role players who know how to play and provide just the type of veteran depth that championship teams need.

Faced with such a talented opponent the young Brimmer & May squad played hard throughout regulation and was able to keep the game reasonably close before eventually falling by 14. 6’5 sophomore swingman Kyle Casey continued to play well for Brimmer as did Joe Sharkey, Kyle Bond, and Derek Retos.

In the second game of the day Lawrence Academy squared off against Class A powerhouse Winchendon who had not played or practiced since a December 15th victory over Blair Academy. But Lawrence Academy deserves a ton of credit as they jumped on their opponent early behind the athleticism and three-point shooting of their swingmen, 6’3 sophomore Darryl Cato-Bishop and 6’4 senior EB Davis, to go ahead by as many as 18 points in the first half. Lawrence also got solid play from their backcourt in 5’9 junior point guard Stevie Mejia who was extremely solid all day long as he controlled the tempo and played with great composure and 6’1 freshman guard Denzel Brito who showed a lot of talent and toughness by holding his own against a very talented and experienced Winchendon team.

Winchendon was able to cut the deficient to 32-24 going into half-time behind the offensive rebounding of Papa Lo and the outside shooting and leadership of Villanova bound guard Malcolm Grant. The second half was an exciting 16 minutes of play as Winchendon was able to take their first lead of the game 38-37 with 9 and a half minutes remaining. That lead grew to 7 points but Lawrence still didn’t back down as they showed a lot of heart and toughness by fighting back before one of E.B. Davis’ many thee-pointers of the day gave them a one point lead 47-46 with under 3 minutes to play in the game. But on the next position Malcolm Grant again showed his leadership and skill by pulling up off the dribble from NBA thee-point range to restore the Winchendon lead 49-47. Lawrence again battled back and tied the game when a Daryl Bishop drive forced defensive rotations that left the lane exposed for a Denzel Brito back door cut and lay-up. After Mike Ringgold went 1-2 from the free-throw line E.B. Davis made an explosive move to the basket for a score and foul call to again retake the lead for Lawrence 51-50 although he missed the free-throw. On Winchendon’s next possession 6’5 forward Mike Ringgold made a hard move to the basket and found Massachusetts native Kinard Dozier for a lay-up that would give them a 52-51 lead that they would not again relinquish. The final score was Winchendon 54 Lawrence Academy 51 in a game that was a solid win for Winchendon and a moral victory for Lawrence Academy as they proved they can compete with anyone in New England.

The tournament will conclude on Friday with a full day of action beginning with girl’s games at 10:00 a.m. and boy’s game at 12:40 starting with Brimmer & May vs. Lawrence Academy and followed by Marianapolis Prep vs. St. Mark’s. The final game of the tournament will be at 7:30 as two of the best prep teams in the country square off when Notre Dame Prep meets Winchendon.