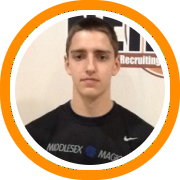 With over 120 coaches from the most prestigious academic conferences across the country present, there were a number of players that shined at Brandeis University in Waltham, MA this weekend.  The Ivy League, Patriot League, NESCAC and UAA were all present to see the emergence of some of the most promising players from New England and beyond.

Reveal Chukwujekwu (Strake Jesuit College Prep, 2013)- The Texas product turned heads of Ivy League coaches today with his display of athleticism.  The 6'3'' guard threw down several monsterous dunks throughout the day, and was all over the court on the defensive end.  His tight dribble (to go along with his elite quickness) enabled him to blow by defenders whenever he wanted.  The future is bright for this strong, young guard.

Zachary Ayers (McQuaid Jesuit, 2013)- Traveling east down I-90 from Rochester, Ayers was the breakout player of the day.  A wirey 6'9'', Ayers is a skilled, step-out 4 man.  His shot is his most dangerous weapon, with range expanding well beyond the 3-point line.  He was willing to bang down low on he boards, too, and took several charges on the day. His recruitment will defnately take a step up if he continues to play like this.

Pete Miller (Northfield Mount Hermon, 2013)- Making a morning appearance, Miller was his consistant self.  He excelled on the defensive end today, with his long arms proving to be too much for the opposition.  His quick feet allowed him to effortlessly help on the weakside, something that does not come as naturally to many other bigs as it does to Miller.

Chima Azuonwu (Rye, NY, 2014)- Azuonwu's stock soared on Saturday, as coaches could see the potential in him before their eyes.  With his wide shoulders and 6'10'' frame, Azuonwu has all the physical tools of a high-major player.  He has soft hands, a high motor, and finishes strong, keys for any developing big man.  His ceiling is very high due to his lack of experience playing the game (and, therefore, his lack of bad habbits).

Hunter Saberty (Oceanside, 2013)- The first aspect of Saberty's game that impresses you is his agility for such as big man.  Like Miller, Saberty provided great weakside defense for much of the day.  While explosive and able to finish at the rim, his offense is a little raw, but his ceiling is very high, as his wide shoulders indicate he can add muscle and be even more of a force in the paint.

Kareem Ismail (Flintridge Prep, 2013)- The California product turned out to be one of the most productive and physical bigs of the day.  He has great size at 6'7'', a high motor, and elevates high to grab the ball on rebounds (defensive and offensive).  His strength lied in pick-and-roll situations, showing his soft hands and strong ability to finish.

Andrew Kaufmann (The Rivers, 2014)- The 6'7'' Kaufmann proved to be the ultimate team player on Saturday.  The skilled forward set his teammates up where they could score, whether it be through dribble drives, backdoor passes, or finding the open man out of double teams.

Dwayne Daniel (NYC, 2013)- One of the best guards here, Daniel's quick dribble proved to be a major threat to defenders, as no one stood a chance at consistantly stopping him.  His offensive arsenal also included an effective pull-up jumper and a step-back that got him the separation he needed.

Matt Staubi (Darien, 2014)- The little point guard has a really quick first step, making it difficult for the defense to keep him in front.  He acted as the catalyst for his team throughout the event, creating offense with his quick, accurate passes and shutting down the opposing team's best guard.

Tarik Smith (St. Paul's School, 2012)- Smith carried over his brilliant play from the Hoop Mountain Super Weeks to this weekend.  He was able to knock down shots from all over the court and got in the lane using a variety of spin moves and crossovers.  One post-grad program will be lucky to have Smith next year, as it is apparent he is improving by the day.

Matthew Tate (Green Farms Academy, 2014)- A big, solid guard, Tate had a breakout day on Saturday.  He finished strong at the rim and shut down the other team's best player by moving his feet and closing out hard.  A good passer, Tate also showed a step-back move that cleared space for him to maneuver.


Best of the Rest

Owen Murphy (Plymouth North, 2013)- Murphy continued his strong play from the Hoop Mountain Super Weeks into the weekend.  The same inside-outside versatility made him an offensive threat all day, as he knocked down outside shots and scored inside with polished post moves.

Isaiah Robinson (Salisbury, 2014)- Another player who looked to build on a strong Super Week session, Robinson displayed great footwork in the post and the willingness to rebound and play tough interior defense in the morning games.  An injury in the afternoon slowed his progress, but if he continues to develop like he has in the past two weeks, he will find stock soaring.

Michael Bregman (Fieldston, 2013)- The big, 6'3'' guard can get to any spot he wants on the floor off the dribble.  He has great shooting touch (both off the dribble and spotting up).  He is explosive enough to elevate and dunk with authority.  He will surely his recruitment rise in the coming future.

Weston Wilbur (Wilton, 2013)- Wilbur has a nice jumpshot to go along with an array of moves to get to the rim.  He finishes strong every time, and seemed to improve as the afternoon went on.

Matt Gerak (Masuk, 2013)- The 6'4'' swingman had a tremendous day, mixing skillful play with a high basketball IQ, a deadly combination.  Look for big things from him this winter in Connecticut.

Dan Sever (Rotberg, 2014)- The crafty 6-footer from Israel showed an uncanty ability to get into the lane and finish.  His sneaky quickness surprised defenders, leading to three big games for Sever.

Kendall Jackson (Suffield Academy, 2013)- Jackson served to be efficient in directing his squad's potent offense.  He also showed an improved one-dribble pull-up from just inside the arc.  Look for big things this winter from Jackson at Suffield.

Ry'n Bland (Bishop Eustace Prep, 2013)- Bland was a beast all day.  His strength allows him to get great position while boxing out, and he pushes his man back.  From there, he releases and goes and gets the ball, something many young players fail to do consistantly.  When he recieves the ball in the post, he is a matchup nightmare, and drew fouls all day long.

Alex Lee (Georgetown Prep, 2013)- The Maryland product matched Bland's toughness all day long, as the duo dominated inside for their squad.  Lee stepped out to show a consistant jumpshot, a threat to opposing defenses moving forward.

Liam Naughton (Darien, 2013)- Naughton shot the ball real well (both off the dribble and spotting up).  His movement without the ball is key, as he does not wait for someone else to create a shot for him.

Nick Marini (Christian Brothers Academy, 2014)- Coming in from upstate New York, Marini didn't waste anytime showcasing his skills.  He changes speeds very effectively, allowing him to blow past his defender.  Once he lost his defender, it was no contest, as he finished everything at the rim.  Marini could be one to watch if he adds a consistent jumper to his polished offensive arsenal.

Mack Montague (Suffield Academy, 2013)- The 6'3'' Connecticut native is a knock-down shooter.  Defenses that left him open this weekend were torched, as he consistantly lit up the scoreboard.

Stedman Lowry (Lakota East, 2013)- Lowry used the courts inside Brandeis as a lauching pad for his shooting display.  The Ohio native lead his team to an improbable comeback by nailing three after three in the second half.

Play of the Day